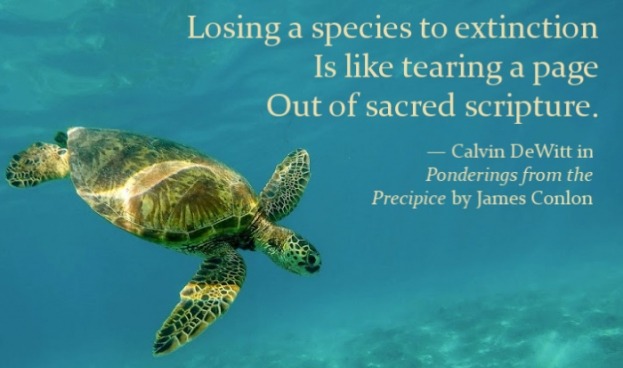 A Prayer amid Global Decline of Biodiversity

Posted by Patricia Campbell Carlson on May 6, 2019

"One million species face extinction, U.N. report says. And humans will suffer as a result," observed The Washington Post on May 6, 2019. We surely have not yet run out of sit-up-and-take-notice warnings about human impact on the climate and therefore on all of life.

When I was in sixth grade, some teachers at Cayuga Heights Elementary School took it upon themselves to help us understand "one million." They printed one million x's on computer paper and posted the sheets along the ceiling of the long hallway that extended from the gym to the library. It took five minutes to walk that hallway, and gazing up at those tiny gray marks was a mind-boggling experience.

We are not talking about one million living creatures. We are talking about one million species. The Post article heartbreakingly mentions lost coral reefs and acidifying oceans that could lead to the collapse of commercial and indigenous fisheries, key pollinators like butterflies and moths that are dying because of homeowners' "bug zappers," the white nose fungus that's killing millions of bats (also pollinators), corpses of gray whales washing up on the shores near San Francisco, and much more. Obviously, this is only the tip of the proverbial (melting) iceberg. The U.N. report does not mince words about the key role human beings play in this collapse.

While the hour is late, the world's best minds have a plan to counteract climate change, said Ken Kimmel, president of the Union of Concerned Scientists, at the April 2019 Festival of Faiths in Louisville, Kentucky. Most of the technical solutions we need are already in place; what they need is — listen up! — political willpower for implementation. As representatives of the world's religious and spiritual traditions, we have a key role to play.

As Pope Francis says in his encyclical on ecology, Laudato Si, “Never have we so hurt and mistreated our common home as we have in the last two hundred years." We struggle to understand what we have done or contributed to doing. We have ideas about how to take responsibility and to change, but we are held back by what is often called "sin": sicknesses of heart like greed, gluttony, and sloth. We recognize that the problems are communal, not merely individual, and that we need to take a dramatic turn as a species to insure the well being of all species.

Keep shaking us awake, as you have been doing. Don't let us close our eyes or our minds to courageous people like Greta Thunberg and members of Extinction Rebellion.

We know that in restoring ecosystems, we restore something of ourselves.

We know that each of us has a role to play in turning around the situation — the literal meaning of "conversion" — and that ours has much to do with inspiring courage, innovating change, and aspiring towards all that is life-giving.

We know that political change in support of Earth's well-being remains of critical importance.

May do all we can and never lose heart.

We quiet ourselves and look to You, abiding in and among us, for the next steps we need to take.