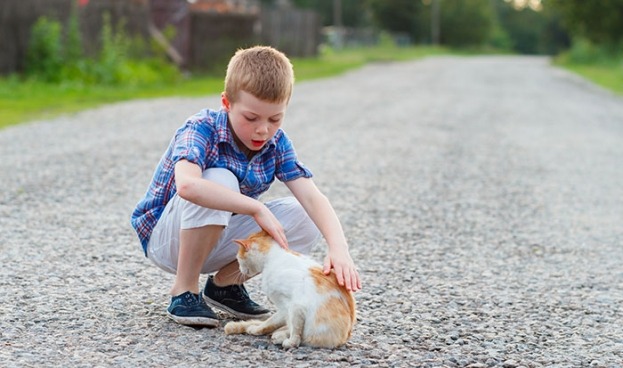 The Religion of Small Things

The wind blows wherever it pleases. You hear its sound, but you cannot tell where it comes from or where it is going. So it is with everyone born of the Spirit.

Imagine that you are an eyewitness to the second coming of Christ. It only lasts fifteen seconds, but still it is impressive. It comes in the form of a little daily action undertaken by your next-door neighbor, a fifteen-year-old teenager named Matthew. You had thought the second coming might come in the form of a more religious person: a Jew, a Muslim, a Buddhist, a Hindu, maybe even a Christian. But Matthew?

Matthew has no readily identifiable religious affiliation. He does not attend church, pray before meals, or read the Bible. If Matthew has a religion, it is rock and roll. He once told you music is the closest thing he knows to God; you understood him perfectly. It is one of the closest things you know to God, too.

In addition to loving popular music he also enjoys watching movies and has a special love for Star Wars. It occurs to you that its episodes function for him as the Bible functioned for his grandparents: giving him a sense of cosmic forces engaged in a battle between good and evil, a hero who fights in the name of the good, and a mysterious energy that can be used for good or evil.

Some people might say that Matthew is secularized, but you don’t quite believe it. It seems to you that for him and people like him, the very binary between secular and religious doesn’t work. He is finding his religion, his touches of transcendence, in the midst of popular culture (movies, popular music) and orange cats. The word religion comes from a Latin word meaning something like “to tie together” the various strands of your life in service to a higher goal. You’re not sure Matthew has a higher goal other than making it through each day in a troubled world, but he is trying to tie together the strands of his life, and music and movies are among the ways he does it. They are his touches of transcendence.

Something you admire about Matthew is his belief in kindness. Looking outside you see an old, orange cat crossing the street in front of Matthew’s house. The cat is limping slowly as a car full of teenagers is coming very fast. They will hit the cat if Matthew doesn’t step in front of them, put out his hand signaling stop, and pick up the cat, taking her across the street petting her along the way. You know this cat very well because she belongs to your family. Matthew is your cat’s savior.

Saving a cat is typical of Matthew. He is very tender hearted, loves animals, and does not want to see anything harmed. His act of gentleness exemplifies second comings. Second comings occur whenever human hearts swell with the Spirit of Christ, leading to spontaneous acts of kindness. Some Christians say the only salvation worth having is a happy afterlife provided by Jesus. Maybe so, but it seems to you that we can be saved from greed, hatred, and confusion, and for wise and compassionate living, even if there is no life after death. Buddhists tell us there are 84,000 gates to the dharma. Surely one of these gates is kindness. Perhaps this is what it means to be saved by Jesus. It is being saved by the Spirit of Christ, however named. This would truly be good news.

Matthew’s act of kindness misses the evening news. The news that day concerned violent deaths in Pakistan. That night as you go to bed you have two images in your imagination: one of blood and tears coming from the face of a Pakistani woman and one of Matthew saving the cat. How should you prioritize them? You know the one coming from the television is more tragic, involving so much suffering and so many human lives, including dead children. You are sad that you live in a world where people undergo horrible and untimely deaths leaving others to mourn the rest of their lives. Matthew saving the cat seems to pale in significance by comparison. “So much for Second Comings,” you think to yourself.

Then you remember that every life lost and everyone left to mourn is like Matthew. They live day by day, hour by hour, and moment by moment. You sometimes forget this. When you learn about people suffering terrible deaths you are tempted to think they are defined by those tragedies, as if they are reducible to the worst thing ever happening to them. Then it occurs to you that these people, too had moments when they enjoyed the poetry of everyday life. They, too had their songs and stories. The nineteenth century poet Matthew Arnold speaks to this when he asks:

Is it so small a thing, to have enjoyed the sun, to have lived light in the spring, to have loved, to have thought, to have done, to have advanced true friends?

These small things — the sunshine, the springtime, the process of thinking, the small accomplishments, and the friendships — are the sacraments of daily life.

The Religion of Small Things

It occurs to you that someone needs to invent a religion of small things: a religion that is intimately connected with daily life in a sacramental way and that has kindness at its core. Considered in itself, it will not focus on questions of life after death or ultimate salvation. It will not claim to have all the truth or access to ultimate reality. Instead it will focus on satisfying relations in this world and be committed to the flourishing of all life: people, animals, and the earth. Its sacred texts will include poems, songs, and stories speaking poignantly about life’s beauty and honestly about life’s pain. Its touches of transcendence will be found in music, other people, and orange cats. Its ethic will be to live with respect and care for the whole community of life, with special care for the vulnerable. It can include but does not require belief in God; and when it comes to God will be open to many different ways of thinking about God –— God as Friend, God as Interconnectedness, God as Music — so long as they lead to kindness. Its faith will be to trust in the efficacy of beauty, even if beauty comes in small portions. One of its primary practices will to collect moments of beauty, scraps of light, in ordinary life and take inspiration from them, for the sake of helping mend the world.

I say that this religion needs to be invented, but in truth it is already emerging, though unnamed, in the hearts of millions on our small planet. It is what scholars call an implicit religion of daily life. Truth be told, there are millions of Matthews in our world: some fifteen, some twenty-five, some sixty-five, and some ninety-five. Some of them are Jews and Christians and Muslims and who draw deeply from the teachings and practices of the religions they love, and who practice the religion of small things with help from their traditions. They hold onto their religious affiliations with a relaxed grasp, because they see organized religion as in service to the well-being of life not the other way around. Others are disillusioned with institutional religion but are seeking to live sacramentally, in a spirit of kindness and beauty. Sometimes they speak of themselves as “spiritual but not religious, by which they mean “spiritually interested but not religiously affiliated.” These two groups –— the religiously affiliated and the religiously unaffiliated — have more in common with another than they do with people of their own religion who are overly zealous and people who are fervently anti-religious. They form a network of spiritual seekers around the world who together belong to a religion of shared humanity: a religion of small things. It is in this small religion, named or unnamed, that the world finds its hope. The good news is that it can grow within and outside the existing world religions. Its spirit blows where it wishes, and most deeply in the hearts of ordinary people, like Matthew.