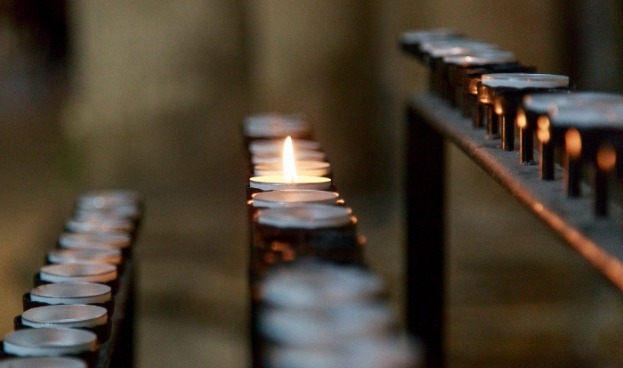 "F" is for Forgiveness

"Forgiveness is the only way to free ourselves from the entrapment of the past."
— Richard Rohr

I was recently approached by a young mother who told me that she was having trouble with forgiveness. I invited her to share more. As her eyes filled with unshed tears, she told me of a painful time in her recent past. She spoke of a family friend's molestation of her young daughter, of the trial, of her daughter having to testify — every mother's nightmare! The man is serving time, but her daughter is forever scarred, and the mother cannot forgive. Who can blame her? Should she forgive a monster?

Most of us do not face anything like this horrific crime in our lives, but still, we have our issues.

Forgiveness may, indeed, be the most challenging work of our spiritual lives, and I wonder if we sometimes make it too easy. I once heard a man on television who announced his forgiveness for the shooter who had just taken his son's life, and later, a woman who offered instant forgiveness to the drunk driver who left a loved one paralyzed. It seems to me that forgiveness should not be so easy; pain of that magnitude needs to be respected and heard and felt.

But even with time, forgiveness might seem impossible, especially in egregious cases. But there is something else about forgiveness we need to understand. When the woman said she could not forgive the man who molested her child, she was thinking of forgiveness in terms of feelings toward the man. Sometimes we think of forgiveness as feeling good about someone again, going back to the way things used to be. Usually, that's the case. We forgive a friend or loved one and the relationship is restored; we are flooded with relief as we enjoy the emotional warmth of reconciliation. But that's not always possible, especially when violence is involved.

In her book The Fall to Violence, process theologian Marjorie Suchocki she writes: "Forgiveness interpreted as feelings of love has little to do with the realities of violence." For Suchocki, forgiveness is a matter of the will, not the emotions. Forgiveness, she says, is the "act of willing the well-being of the other." Wishing another's well-being means offering a wish or prayer for their healing and wholeness. Becoming whole is a painful process and, in the case of the violator, includes the awful self-knowledge of the pain they have caused.

And so, even when reconnection and warm feelings toward another may be impossible — and even inappropriate — there can still be forgiveness. Forgiveness as an act of the will releases us from dark, obsessive thoughts of the other; forgiveness creates new material for God to work with; forgiveness offers fresh threads for divine weaving as God seeks to bring about what can be. That is, God weaves together the threads of our pain with divine imaginings into some fresh possibility for beauty, albeit, sometimes in somber patterns of tragic beauty.

Though we may never "feel good" about some who have wronged us, we can — when the time is right — find a sense of freedom by releasing them to God and wishing for their well-being. During the time of processing and struggling with our anger or rage, we might feel as if we are trapped in small, dark room. But when we feel ready to take that step forward and wish the well-being of the violator, then we can say goodbye to the darkness. We walk out of our prison to find ourselves embraced by the warmth of lavish love. We are free.