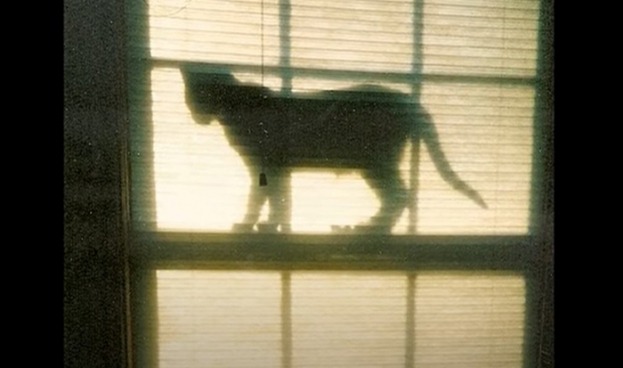 Charles Takes Care of Himself

"But one day I really watched him. He was chewing on a piece of grass. He gave his full attention to that single blade. His body was still, his fur soft in the sun. And then I started noticing other things about Charles. He goes out in the rain and doesn't get wet. He takes care of himself. He is a survivor. In recent months I've learned to meditate. I open a window, even in winter, and sit in a black metal chair. Charles sometimes joins me. We listen and hold tight to every one of our nine lives."
— from the YouTube video "Nine Lives" by Anne Aronson

Three Cheers for the Ego . . . Sometimes

We process theologians believe that the lure of God within each heart is a lure to live and to live well. This is true of human hearts and also of feline hearts. This inwardly felt lure is a lure to survive with satisfaction relative to the situation at hand. We need to stay out of the rain and sometimes we may even have to engage in battle. At least this is the case with Charles.

But in truth it is the case with us, too. Some people present "spirituality" as if it is always about caring for others, but never caring for ourselves. They reduce the whole of spirituality to transcending the ego, as if having an ego is always a bad thing. But there are many people, in many circumstances of life, whose deepest need is to be less dependent on others, to take care of themselves, and to grow in a sense of positive self-regard. They need to be able to say "I am Somebody."

Is this a sin? The world's religions do a tremendous disservice to people when they overemphasize dependence on others or, for that matter, dependence on God, at the expense of recognizing the value of self-dependence. It's a balancing act, but sometimes having an ego is very, very important. If we don't love ourselves, we have no selves to give others.

This could suggest that cats are Zen Buddhists but dogs are Pure Land Buddhists, but my sons, Jason and Matthew, saw things differently.

All dogs are Christian, all cats are Buddhist.

When our sons were young, they had the unique experience of getting to know a Zen Master from Japan: the Reverend Keido Fukushima from Tofukuji Monastery in Kyoto.

He would visit us every year to give a lecture at the college where I teach, and he shaped my own life deeply. You can learn a little about him in the article: "Can a Christian Be a Buddhist, Too."

During his trip to the my city, he would also visit my home and eat dinner with my family, getting on the floor and playing with my sons during their very early years. They grew up thinking that Zen Masters are joyful, playful, and at home in the world.

When Roshi Fukushima was with us, we always sensed that he was with us. He was not distracted, not thinking about other things, not preoccupied. One of his secrets was years upon years of Zen meditation. He had learned to concentrate his mind and be in the moment. Being in the moment did not mean, for him, neglecting time. He could anticipate the future and remember the past like the rest of us. When he was with us in our home, he knew when it was time to leave so the kids could go to bed. But he was in the moment in the sense of being present, being here, like a cat.

He taught my family how to meditate, too. I remember it well. There we were — my wife Kathy and me, and my two sons, then ages 7 and 9 — sitting in our living room in the half-lotus position, trying to be here and now by counting our breaths. It was hard for us, and it still is. We are distracted like the rest of us. But I think we are all grateful for learning how to do it.

We are an animal-loving family, and we have always had dogs and cats as companions in our home. One time my youngest son, Matthew, noted that Roshi's presence was like that of our cats. "He can be focused; he can pay attention. Maybe all Zen masters were cats in previous lifetimes."

My other son, Jason, felt the same way. He was trying to figure out differences between Buddhism and Christianity, and he jokingly said: "I think all dogs are Christian and all cats are Buddhist." He said this because we were church-goers, and relations between Christianity and Buddhism were on our minds.
​
We laughed but knew what he meant. "Many Christians are gregarious and outreaching. They want to lick your face. Cats are quieter and more collected. They wanted to sit still and look." He had been hanging around some evangelicals.

In truth I think Roshi was both Buddhist and Christian. He could sit still and look, but he sure liked to play on the floor. One time he and I were driving down the street and he saw a Labrador Retriever with a huge bone in his mouth, walking across a lawn to a place where he could bury it. The dog was as focused as any good cat on the task at hand. Roshi turned to me and said: "See that dog running across the yard?" I said yes, and he responded: "That's a Zen Master."

For more lessons from cats, join us January 18 - February 12, 2021 (and on-demand afterwards) for the e-course The Spirituality of Cats by Jon M. Sweeney and his kittens Martin and Rosa.