Robots in Our Future

The word robot was coined in 1921 from the Czech word "robotta" meaning compulsory labor. Since then, we've been treated to a variety of science fiction tales about these technological creations. The growing presence of robots is already changing the labor market. Experts believe that robots will evolve into companions and information bases, similar to C3PO in the Star Wars trilogy. With their fast silicon brains and their tireless bodies, these intelligent machines will be capable of round-the-clock work, creative thought, and perhaps even independent action. 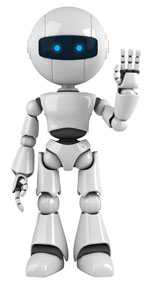 In a recent article on Wired.com, Kevin Kelly predicts that before the end of this century, 70 percent of today's occupations will be done by robots. After taking over the repetitive labors of assembly line workers, robots will replace workers in warehouses. They will be used in the picking of fruits and vegetables and then in cleaning offices and schools. Robots are already being used in surgeries and nursing homes. Soon they may be writing newspaper columns and dispensing pills at the pharmacy.

While many jobs will be lost to robots, Kelly also sees that personal robots will help us with the tasks of our daily lives, thus freeing us up for things we've never had enough time for before: such as service projects and volunteering. And then there are some things robots can never do for us — our spiritual practices. Robots may turn out to be blessings, but we'll still have to be the ones saying the blessings!