The High Cost of Waging Peace

On June 28, 2012, peace activists Sister Megan Rice, Greg Boertje-Obed, and Michael Walli broke into the Oak Ridge Y-2 nuclear weapons production facility in Tennessee to symbolically disarm these weapons of mass destruction. No security came to stop them as they cut through the fences surrounding the facilities, hung up peace banners, spray painted some slogans, and sang some songs. When they were done, the three non-violent protesters surrendered peacefully and were arrested and jailed. The next day they were charged with federal trespassing, a misdemeanor charge that carries a penalty of a year in jail. 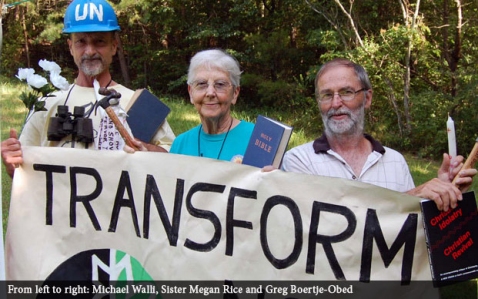 According to a report on CommonDreams.org, once the press began reporting on this security breach at a major U.S. facility, the government escalated the charges against the three. Over the course of five months these misdemeanor trespassers were transformed into multiple felony saboteurs. They were eventually convicted of violent crimes of terrorism with potential prison terms of 15 years. They await sentencing in September 2013.

Their story certainly casts a shadow on the future of dissent in the United States. A few years ago, we did a Spiritual Literacy Blog on the efforts of spiritual activists to establish a U.S. Department of Peace which would provide practical, nonviolent solutions for the problems of domestic and international violence. With the annual military budget at nearly 1.2 trillion dollars, it is time for Americans of all the religions to band together and pave the way for waging peace in our time as an alternative to nuclear deterrence. If such a movement ever saw the light of day, these three peacemakers would be heralded as prophets rather than branded as terrorists.