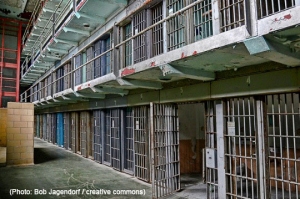 On Commondreams.org Sarah Lazare shares the dire impact of four decades of massive imprisonments in the United States. This report by the National Research Council (an arm of the National Academy of Sciences) was commissioned by the National Institute of Justice and the MacArthur Foundation. Here are some of the findings after two years of data review:


The committee made a series of policy recommendations aimed at decreasing incarceration rates, improving prison conditions, and expanding programs. In a response to the report, Isaac Ontiveros of Critical Resistance told Common Dreams: "We can now read UN reports about genocide in another country, and do that at arm's length, but now we have even fairly conservative institutions like the National Research Council pointing out the systematic state violence in the U.S. that uses courts, police, the prison system, cultural institutions, and media to target and unleash incredible amounts of violence against certain groups of people."