We are not surprised by the large role pictures and videos of cute, beautiful, and silly animals (usually cats and dogs) play on the social media. Some people genuinely adore their animal companions and want to share photos of them with their friends. Others view their pets as players in shows directed by them to win likes and add to their stature as popular media mavens. While we understand the appeal of these posts, we still have mixed feelings about them. 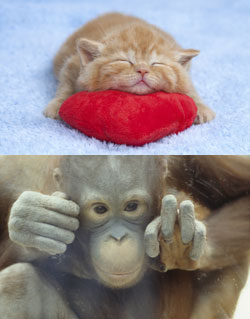 We know our attitude has been influenced by a spiritual instruction we read about in Wisdom of the Elders by David Suzuki and Peter Knudtson, which we quoted in our book Spiritual Literacy. In the sacred laws of the Chewong people of Malaysia, a major tenet concerns the proper human attitudes toward other animal species. Specifically, it mandates that "no animal whatsoever may be teased or laughed at."


If we should not tease animals, what about confining them in zoos and "wildlife" centers? Yes, they are safe from predators and poachers, but are they free?

More mixed feelings about the ways animals are treated came up when we read "Zoo Animals and Their Discontents" by Alex Halberstadt in The New York Times. He presents a portrait of Dr. Vint Virga, a veterinarian who tends to the psychological welfare of animals in captivity in zoos across the United States, where there are roughly 250 accredited zoos and aquariums, and in Europe.

Virga is convinced that his animal patients possess unique personalities and vibrant emotional lives. More and more people are agreeing with this understanding, including zoo keepers who call upon him when snow leopards get depressed, bears become obsessive-compulsive, and zebras get phobic. Virga points to the improvements which have taken place in zoos such as better diets for the animals, education departments, and full-time vets on staff. But can these improvements justify the boredom, confinement, and stress the animals feel in captivity? It is a hard question to answer given the public's positive response to zoos as wonderful places they can take their children and expose them to what they perceive to be the wonders of the animal kingdom.

And some people love zoos. In an essay titled "Animal Magnetism" at aeon.co, David P. Barash conveys his delight in watching animals. This experience ranks second to actually visiting countries in Africa or Antarctica where you can see free-living creatures in their natural environment. Barash is also a big fan of watching birds even when they are not "flying, darting, soaring, walking, dabbling, paddling, or hopping about." He notes: "These perceptions challenge our sense of the mundane." He is pleased that painters and poets are eager to join in the festivities of animal watching.

Barash ends with the familiar quotation by Henry Beston, long a favorite of ours (and quoted in Spiritual Literacy). It was written in 1928:

"We need another and a wiser . . . concept of animals. Remote from universal nature and living by complicated artifice, man in civilisation surveys the creature through the glass of his knowledge and sees thereby a feather magnified and the whole image in distortion. We patronize them for their incompleteness, for their tragic fate for having taken form so far below ourselves. And therein do we err. For the animal shall not be measured by man. In a world older and more complete than ours, they move finished and complete, gifted with extension of the senses we have lost or never attained, living by voices we shall never hear. They are not brethren, they are not underlings; they are other nations, caught with ourselves in the net of life and time, fellow prisoners of the splendour and travail of the earth."

In sum, we are turned off by the exploitation of animal companions when they are made into objects of ridicule on the social media. We are often touched by the sweet tribute to pets in photos and videos on Facebook and elsewhere. We applaud the caring sensitivity that Dr. Vint Virga brings to his work with traumatized and stressed out animals in captivity. But we still have mixed feelings about zoos and the animals confined within their walls. We agree with the delight David P. Barash finds in watching animals. These creatures deserve our loving attention to their beauty, playfulness, and stout-heartedness!


Next Post: We'd Rather Shock Ourselves than Quietly Sit Alone