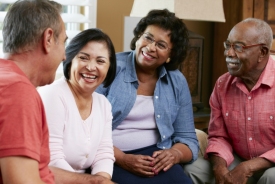 In 1968 gerontologist Robert Butler coined the term "ageism" to describe the many ways in which society discriminates against the old. Maggie Kuhn formed the Gray Panthers in 1972 as a network of older people dedicated to fighting ageism in all of its nasty and degrading forms. This organization brought about national and local changes in nursing home procedures, health care, and forced retirement. Kuhn wrote:


"Old age is not a disease – it is strength and survivorship, triumph over all kinds of vicissitudes and disappointments, trials and illnesses."


Despite the work of the Gray Panthers and other groups, ageism still is rampant in feature films and on television programs where we see long- lived individuals not as sages or exemplars but as frail and doddering bumblers. In The Gift of Years, Joan Chittister laments:

"So older people are portrayed as slow, but not as wise or patient. We see them as ill, but not quite in charge of their own lives. We are reminded constantly that they forget things, but not a single note is made of the fact that everyone else does as well."

In an article posted to newoldage.blogs.nytimes.com, Jane Gross salutes the new project of Alice Fisher who has become "a community organizer for folks of a certain age." Her mission is "to help move the imperative of an aging society to the front burner with the strategies of the civil, feminist and gay rights movements."

In February of 2014, Fisher launched the Facebook page Confronting Ageism linking to essays and aggregated articles on mandatory retirement, age-discrimination lawsuits, ageism in medicine, and living options for the elderly. The site also includes reading lists, inspirational sayings and photos of celebrated older people. Fisher is hard at work planning consciousness-raising groups similar to those used in the women's movement.


We give our support to Fisher and all others who are combatting ageism and providing resources to equip elders to make the most of this stage of life.