Posted by Frederic Brussat on September 8, 2014 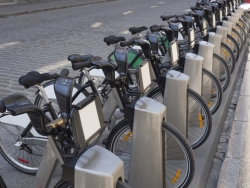 In the LosAngelesTimes.com, Sandy Banks writes about how she first heard about the sharing economy. Her daughter was able to travel cheap in Europe by going online each day and finding a couch at a stranger's place where she could sleep. She called this the "peer-to-peer economy."


After missing the last train to San Francisco one night, Sandy couldn't get a cab and downloaded the Uber app on her cellphone. In the blink of an eye, she was picked up and taken to her destination for half the price of a cab. She sees this company as meeting the needs of urban people with busy, fragmented lives. Now Uber operates in every continent except Antarctica. Sandy loves the convenience and transparency of the ride-sharing process.


Another aspect of the sharing economy could be called the "the Netflix economy." It is animated by web start-ups that either rent items themselves or serve as the middlemen, linking people who want something with people who own it. In an NYTimes.com article, Claire Cain Miller charts the rise of the rental economy which many cultural analysts see as a shift away from the old model of overconsumption with its emphasis on owning more things. Here "the rental economy is part of a growing post-recession movement to value experiences over possessions."

From a spiritual literacy perspective, two of the most interesting aspects of the evolving sharing economy are the importance of trust in these transactions. This new paradigm challenges us to not be frightened that others are out to take advantage of us. Or as Ernest Hemingway put it: "The best way to find out if you can trust somebody is to trust them."


The second positive dimension of the sharing economy is that it enables us to expand our circle of friends and colleagues, to empower local initiatives, and to deepen collaboration between like-minded people. "Creative people in cities around the world are rising up," declares Neal Gorenflo, cofounder of Shareable magazine. "We are not protesting, and we are not asking for permission, and we are not waiting – we are building a people-powered community right under everyone's noses."