Midlife Crisis and Then Wisdom

Posted by Frederic Brussat on December 1, 2014 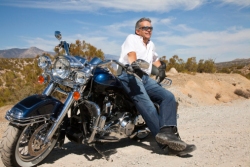 In a thought-provoking article in theatlantic.com, Jonathan Rauch shares some of the feelings of middle age and then moves on to an exploration of wisdom in the last stages of life. Many individuals in their 40s and 50s are decked by unexpected divorce, heart attacks, and the death of parents. Studies have confirmed that middle age "nearly doubles" a person's likelihood of using antidepressants to cope. Rauch hits the nail on the head when he characterizes this stage of life as "a constant drizzle of disappointment."


But there is good news on the horizon. Studies show that people's satisfaction with their life increases as they age. He quotes Stanford University psychologist Laura Carstensen who found that "the peak of emotional life may not occur until well into the seventh decade. As people age and time horizons grows shorter, people invest in what is most important, typically meaningful relationships, and derive increasingly greater satisfaction from these investments."


Rauch concludes this article with commentary on the research being done on the neurology of wisdom which includes probes on why older people's brains respond less strongly to negativity than younger people's brains do. The author concludes, "Science has a great deal to learn about the intersection of aging and happiness."


We remain convinced that spiritual practice plays a major role in the aging process and the nurturing of happiness in elders. Practice is also valuable for anyone experiencing disappointment at midlife. We look forward to future articles and reports on the neurology of wisdom and intend to take a look at wisdom as a spiritual virtue that is both practical and profound.