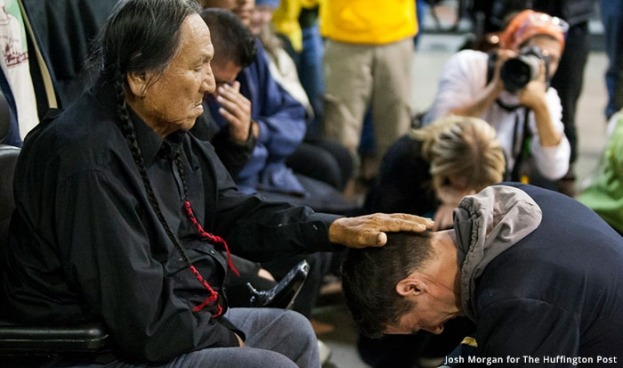 Posted by Frederic Brussat on December 16, 2016

Wes Clark Jr., the son of retired U.S. Army general and former supreme commander at NATO Wesley Clark Sr., was part of a group of veterans who went to the Sioux reservation in Standing Rock, North Dakota, in early December 2016. They were there to stand with the Native tribes acting as Water Protectors protesting the construction of the Dakota Access Pipeline. The veterans joined in the celebration when the U.S. Army Corps of Engineers denied an easement for construction of the pipeline under the Missouri River.

Lakota spiritual leader and medicine man Chief Leonard Crow Dog and Standing Rock Sioux spokeswoman Phyllis Young were among several Native elders who thanked the veterans for standing with them during the protests. Then Clark and other veterans got into formation by rank and addressed the elders. Before kneeling before them, they asked for forgiveness for the long brutal history between the United States and Native Americans. Clark said:

“Many of us, me particularly, are from the units that have hurt you over the many years. We came. We fought you. We took your land. We signed treaties that we broke. We stole minerals from your sacred hills. We blasted the faces of our presidents onto your sacred mountain. When we took still more land and then we took your children and then we tried to take your language and we tried to eliminate your language that God gave you, and the Creator gave you. We didn’t respect you, we polluted your Earth, we’ve hurt you in so many ways but we’ve come to say that we are sorry. We are at your service and we beg for your forgiveness.”

Chief Leonard Crow Dog offered forgiveness and urged for world peace: “We do not own the land, the land owns us.”

This event was the first time that American military men and women have formally asked forgiveness for what was done to the first peoples of their land. The governments of Australia and Canada have apologized to indigenous peoples in their countries. We can only pray that the U.S. government will follow the example of these veterans and not only seek forgiveness but also vow to be of service to Native peoples and their land.