The Nun Who Broke Into the Nuclear Sanctum 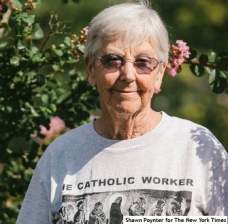 On July 28, 2012 an 82-year-old nun and two companions breached extensive security set-ups at the Oak Ridge nuclear reservation in Tennessee in order to nonviolently voice their protest against this country's nuclear movement. Sister Megan Rice is profiled by William J. Broad in this article in The New York Times.

Sister Rice is a Roman Catholic nun of the Society of the Holy Child Jesus who has been arrested 40 or 50 times for acts of civil disobedience. Speaking of her actions, this courageous pacifist said: "It's the criminality of this 70-year industry. We spend more on nuclear arms than on the departments of education, health, transportation, disaster relief and a number of other government agencies."

We salute the courage and creativity of Sister Rice in her crusade against the nuclear movement; she and her companions pulled off what some experts call the biggest security breach in the history of America's atomic complex, making their way inside the site to where nuclear bomb parts and fuel are stored. Taken into custody this ardent pacifist faces a prison term from five to sixteen years and fines up to $600,000.


We see Sister Rice as an icon of God, standing as a shining light of God's peace in a world filled with deadly and destructive nuclear weapons. Her witness calls us to join in protesting this continuing military madness. Let us hope and pray that her act of conscience has seeded a reinvigorated antinuclear movement where more spiritual people are willing to lay their lives on the line for the safety and well-being of the planet.