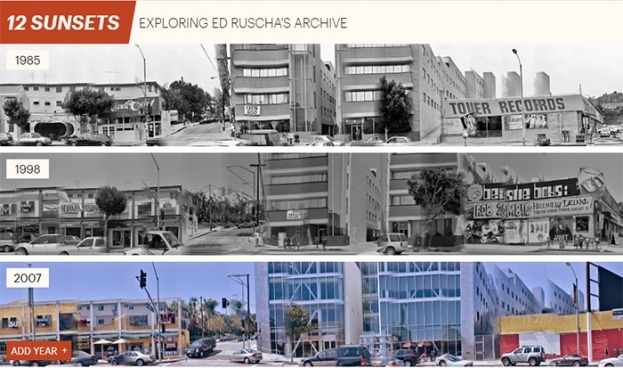 50 Years of the Same Street

Posted by Frederic and Mary Ann Brussat on December 20, 2020

In our book Spiritual Literacy, we recounted a scene from the movie Smoke. Auggie owns a cigar store in Brooklyn and every morning at 8 a.m., he takes a photograph of his special place on Earth from across the street. He has over 4,000 of these pictures collected in albums. One day, he shows the albums to Paul, a regular customer, who pages through them rapidly. He is puzzled by Auggie's pictures and complains that they are all the same.

But, of course, they aren't. Paul just has to slow down and look more closely to see that each one is unique. We consider this a good example of spiritual literacy, finding signs of the sacred in everyday life.

So imagine our astonishment and delight when we stumbled upon an article by Brenda Cronin in The Wall Street Journal: "Artist Ed Rusha Spent More Than 50 years Photographing the Same Los Angeles Street." Over the years he documented what has changed and what hasn't on a number of streets, including Sunset Boulevard, which runs 22 miles from downtown Los Angeles to the Pacific Ocean. Now some 65,000 of his photographs of the street have been digitized and collected in “12 Sunsets,” an online archive launched recently by the Getty Research Institute in Los Angeles.

The artist says that people used to ask him what he was doing, and he'd say it was a school project, perhaps because nobody would believe he was just doing it out of curiosity. The now 83-year-old artist has found great pleasure in this "obsession" and thinks of his photographs as a "kind of geological geographical phenomenon" where "everything is as important as the next thing."

Andrew Perchuk, deputy director of the Getty Research Institute, praised his photography: "There is no other such fine-grained record of an American city that anybody knows of." The images are invaluable resources for demographers, urban planners, and architectural historians. We'd add that for those yearn to experience the wonders of everyday spirituality in the city, these photographs are your ticket to the practices of being present, wonder, and attention.