In my last post, I mentioned my "test tubes of love." Here's how a used spice kit and some leftover, long, colorful strips of paper helped inspire our gratitude ritual.

Last year I decided to celebrate my birthday in June with a big party. It wasn't one of those milestone ages. I just wanted and needed to gather all the people from the different parts of my life and bring them together in my home. Having people in my home is really important to me. It's something I got from my mother, the consummate hostess. Being surrounded by all that love and positivity is what it's all about. 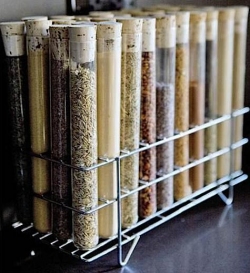 When I began imagining what I would do for food and decorations for the party, I looked around my home and realized, "I don't want anyone to bring any gifts. I have too many things already." One of those things is a set of test tubes. Years ago my dear friend Michelle gave me this wonderful set of herbs and spices in a rack of test tubes. She knew I enjoyed cooking and science and this was the perfect blend. I loved this set so much that I kept it well beyond the usefulness of the herbs and spices, and even when it fell off the shelf and a third of the test tubes broke, I could not part with it. The test tubes sat waiting for the right art project to come along.

My birthday became the occasion. I would use the test tubes for a collaborative art project that my friends could participate in and that would leave me with a wonderful reminder of the party. Ideas of filling the tubes with different colored sands or colored water came and went. Both too messy and tricky, especially given the number of people I hoped would come. Then, when I was doing some purging, I came across these really brightly colored papers. Hmmm. Those would look neat in the test tubes. 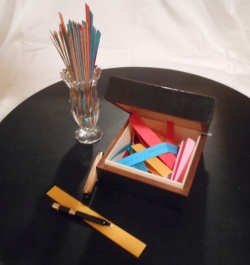 Around New Year's 2013 my friend Joshua sent out a suggestion to family and friends. It's been going around the Internet so you may have heard about this too. It's been called the "Good Things Jar" or "Happiness Jar." Instead of making resolutions for the New Year, get an empty container and some post-its and then through the year write down the things that bring you happiness and put the post-its in your container. Then on the following New Year's Eve, take them all out and read them, remembering those good things, people, places, and events that you may have forgotten.

I have a sticky relationship with New Year's at best. I don't really drink, large crowds overwhelm me, and it all just seems so forced. And I've never been one for making New Year's resolutions, so this alternate ritual really fit the bill for me. I loved the simplicity of this but even more the idea of spending New Year's Eve reflecting on all the positive, good, happy things that were a part of my year.

Ok, complete transparency — I only stuck with it through the middle of April but I have to say when I sat down on New Year's Eve and went through those three and a half months, I was surprised by how much I had forgotten and at the same time was elated at how easily I was able to recapture all those good experiences. Lunch with my friend Aram in late January, the little brown dog playing on the sidewalk during my morning commute on a grey winter day, sled riding with friends during the big snow fall in February. Simple things — some little, some not — that just got lost in the comings and goings of daily life. It was a fantastic way to bring in the new year, sitting quietly and reflecting on them.

I now have a special little area set up for this year. Fred and Mary Ann gave me a lovely little box as one of my Christmas gifts, perfect for holding my good things. My dean Joseph, from when I was in seminary, gave me a beautiful handcrafted pen he made, which I was afraid of taking out of the house for fear I'd lose it. It has become my good things pen. Along with some colorful strips of paper, a little bud vase I've had forever, and viola! "Good Things Central."

So this idea of writing small notes to myself had been planted. As I thought of the birthday party it started to sprout. Fortune cookies popped into my head. An idea was born!

June arrived, and the party was underway and I was overwhelmed by the turn-out and the fullness of love that graced my home. Midway through when the party was in full swing, I got everyone's attention by ringing my crystal singing bowl. I stood on an ottoman and thanked everyone for coming and for honoring the no-gifts request. But I admitted that I did, in fact, want something from them.

We all have bad days sometimes, when we feel low, insecure, unworthy, unloved, yada yada yada. And it's hard to remember the truth about ourselves. So I asked for wishes, affirmations, a favorite prayer — something about me, a truth that they thought I should know and remember for the coming year when I was feeling down, less than, or unlovable. 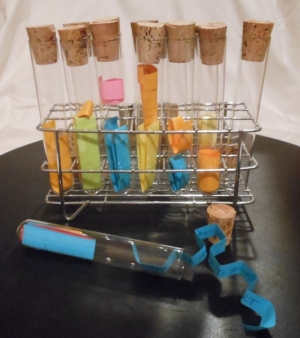 The invitation, if they felt comfortable and inspired, was to take one of the colored strips of paper, write out their "gift" to me, signed or not, fold it and place it in a test tube. Then through the year, whenever I was having one of those days, I could pop open a test tube and pull out one of these little notes to help me remember the truth about myself. Plus it would make a great art piece in my home, placed in a prominent spot that I could see right when I walked in the front door.

Did my guests ever get into this! Many people created multiple notes. Some got very creative with their folding techniques. Every now and then I'd see someone get a sudden inspiration, run over to grab a strip of paper and pen, giggling or laughing outright as they stuffed a tube with their note.

We all need a little help every now and then; God knows, I do. But asking for help is another story. I have trouble picking up the phone or getting out of the house when I fall into one of those moods, even when I know reaching out is what I need to do. So instead, as a back-up, I have these little test tubes of love. When I'm just not feeling right, I randomly pick a test tube, pull out a note, and am instantly reminded about a truth about myself. Sometimes I don't even need to actually open and read anything. It's enough just to see those bottles sitting there filled with the love on those colorful strips of paper.

This has becomes one of the most special things of my life. There are still several months before my next birthday and I'm glad to say I have many full tubes of love. Does that mean I've had less bad days? Maybe. And maybe just knowing that they're there has helped me not fall so deep when I do feel bad. I'm not sure if I'll have a big party again this year but whenever I do have another, I can guarantee you, I'll be asking for refills.

Oh, and all the notes I have read? Each one has been special and sweet and just what was needed at the time. And I'm saving them in a vase nearby, to be read, all at once, on my birthday eve. Who says you can't have your cake and eat it too?

Here is another note to put into a test tube: "You are a powerfully creative being." It would be on yellow paper!