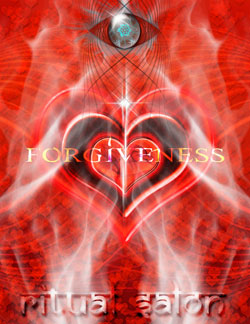 
When each person arrived they were invited to pick a "vessel" – a floating votive candle holder. A very large bowl of water was placed in the center of the circle along with a large floating votive holder. Once everyone was settled, my friend shared his situation with his father that had compelled him to suggest this ritual. I explained the elements, sequence, and directions for what was to come. We then created our sacred space by calling in the directions and added Above and Below (or without/within or outer/inner) to them.

Votive Holder (unlit) - "Please hold your votive holder. This vessel you picked represents the best possible you. But you are not able to fully express your light because the burden of that which you have not forgiven within or about yourself and that which you have not forgiven in others. What is unforgiven, as well as your resentments, keep you from expressing your best self. Notice you are not alone, all those around you are living dimmed lives also." (Set votive holders down.)

Stones (a bowl of river stones is passed) - "Gather a handful of stones in your left hand. These stones represent your lack of forgiveness towards yourself and any resentments you hold. They are debris you have accumulated along the way of living your life. We don't really notice them because the weight builds up slowly, stone by stone. Eventually the collective weight bears does down on us but we may not even remember what it's from. We wonder why we don't feel as light and free as we could. Take some time to think about what you need to forgive in yourself."

Strings (three skeins of green yarn are passed around, starting from three different points of the circle) - "These cords are the entanglements and attachments to the people, places, and situations that you have not forgiven. As the cord comes to you, lightly wrap it around your left wrist and pass it to your neighbor on the right. Continue wrapping and passing each cord that comes to you."

(Skeins are passed until each person has three strands loosely wrapped around his left wrist, which is simultaneously holding a handful of river rocks.)

"Take a moment to think of those you have not forgiven and of resentments towards others that you are hanging onto."

"Look around our circle and notice how we are all bound to each other by these cords of resentments and lack of forgiveness. They keep us from being fully in the world. We are inhibited and bound to the whims of others. The energy needed to maintain these entanglements, to keep the story and the resentments alive, drains us and weighs us down even more, along with the stones."

"By recognizing that all wrongs are the same wrong, every failing the human failing, every insult a cry for help, consider what would make our lives easier. Using our energy to hold this weight and maintain these entanglements or to offer our forgiveness and let go?"

"Of those situations or people you brought to mind that you haven't forgiven or hold a resentment towards, can you choose one you are willing and ready to forgive, or at least open to exploring the idea of forgiving. With that situation or person in mind,take the scissors as they are passed to you and, inhaling as you open them, exhaling as you close them, cut the cords of your neighbor on your right and say, 'I forgive you, I release you, I let go.' "

"As you wait to have your cords cut, you may notice a domino effect. You forgive and release others and eventually you are forgiven and released until we are all free of the cords of unforgiveness and resentment that hold us back."

"Now take a moment to truly notice the full weight of what you're still holding against yourself. Reflecting again on where you may be in need of self-forgiveness choose something about yourself you are willing to forgive. 'To forgive yourself is to release trapped energy that could be doing good work in the world,' (D. Patrick Miller in The Little Book of Forgiveness).

"Gather the cut cords around you and place them in your right hand. In a moment we will place the cords around the base of the bowl and the stones into the water as symbolic offerings back to Mother Earth, who can take that which held us back and transform it into that which benefits growth.

"And now to offer forgiveness to yourself, place the cords around the base of the bowl and as you drop the stones into the water please say:
'I forgive myself, I release myself, I let go of this burden.' "

"Breathe into this space of lightness and freedom for a moment. Released from your burdens and entanglements, now please hold the vessel of your true self; contemplating where you can bring your light into the world and be an instrument of peace as we listen to the Prayer of St. Francis. Any time during the song when you feel ready to share your restored light, place your votive into the bowl after lighting it from the large votive representing the source of all light." 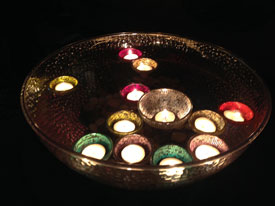 "Please pray with me: O Creative Power of Life, restore our light within us. Help us to not bind ourselves or others through our inability to forgive. Keep us free of the burdens of perfection. Do not let us cloud our light with resentments. Do not let us be seduced by that which would divert us from our true purpose, but illuminate the opportunities of the present moment so that we may forgive others and ourselves and forgive yet again. Amen."
Close and thank the directions.

We sat in silence for quite a while. Some people looked at the glowing bowl of floating candles; others were silently sobbing. It was a very intimate space we were in and I was unsure how to transition into our potluck dinner. Normally there is a celebratory outburst after the rituals. I think I was caught off guard by my own experience of the ritual and went blank.

I quietly asked what people needed but got no response. Then my friend on my left leaned over and whispered, "I think we need to hug." As soon as he said it, I knew that was what was missing. So I asked everyone to stand and hug everyone else in the group. Suddenly the group was jubilant and celebratory.

A lot of feelings were still bubbling up but everyone said they felt a sense of peace and relief. Someone mentioned how he was surprised by the physical ramifications of holding onto the resentments -- that holding the rocks began to affect his back and neck. He wondered how, as he gets older, holding resentments and not offering forgiveness would affect his physical being. He hadn't realized the physical ramifications of resentments.

Another shared that he realized he didn't want to let go, to forgive the person he had initially chosen because that person was dead and he realized it was one of the few things he could "hang onto" about him. That came as a surprise to many and gave us all pause to see if there were people in our lives who had died that we hadn't forgiven and to ask ourselves why we hadn't.

Many also agreed that the wrapping of the yarn was a powerful way of seeing how we are all connected in positive and negative ways.

And finally someone shared that he's not a "casual hugger" but it felt like the perfect way to end this. It was just what he needed to close the ritual.

Months later, I've still had participants sharing how the ritual helped them. Someone in the group who at best had a tumultuous relationship with his mother, found out she was dying shortly after the ritual. He said he was able to go be with her, and to truly be of service to her because he realized he wasn't carrying all the baggage about her that he had been for many years. He was able to be truly present for her and for himself, coming from a place of love rather than anger and resentment.

Forgiveness is an ongoing process and I don't want to imply that this ritual solved everything, but each step helps. As Desmond Tutu shared in The Book of Forgiving:

"The work of forgiveness is not easy. Perhaps you have already tried to forgive someone and just couldn't do it. Perhaps you have forgiven and the person did not show remorse or change his or her behavior or own up to his or her offenses — and you find yourself unforgiving all over again.

"Forgiveness is not an effortless act for any of us, and it does not serve anyone to minimize the complexity involved in the work of forgiving. It is best to break our forgiving down into bite-size pieces, and begin from wherever we are standing. Tell your story for as long as you need to. Name your hurts until they no longer pierce your heart. Grant forgiveness when you are ready to let go of a past that cannot be changed. Reconcile or release the relationship as you choose."


I hope this ritual offers you a way to break forgiveness down into bite-size pieces.