By Diane Ackerman
How deep play aids us in our search for higher consciousness.

"Deep play is the ecstatic form of play. In its thrall, all the play elements are visible, but they're taken to intense and transcendent heights. Thus, deep play should really be classified by mood, not activity. It testifies to how something happens, not what happens. Games don't guarantee deep play, but some activities are prone to it: art, religion, risk-taking, and some sports — especially those that take place in relatively remote, silent, and floaty environments, such as scuba diving, parachuting, hang gliding, mountain climbing.

"Deep play always involves the sacred and holy, sometimes hidden in the most unlikely or humble places — amid towering shelves of rock in Nepal; crouched over print in a dimly lit room; slipping on AstroTurf; wearing a coconut-shell mask. We spend our lives in pursuit of moments that will allow these altered states to happen. The Australian Aborigines search for it on wilderness treks called walkabouts, during which young men of the tribe go alone into the dangerous outback to gain strength and wisdom. Buddhist lamas and Hindu sadhus travel, nearly naked, to pray atop glacial mountains in Tibet. People from many cultures have gone on soul journeys into the wilderness, where risk, hunger, pain, exhaustion, and sometimes self-torture might inspire visions. Young Masai men set off on a pilgrimage to Mount Kilimanjaro, the sacred center of their world, as part of the initiation rite known as Moranism. Native Americans have often used ritualized running to scale mental heights. The Hopis stage many such races every year, featuring paint, costumes, fasts, and prayer. The Crow Indians run to exhaustion to persuade the gods that they deserve good luck. The Zuni run twenty to forty miles while kicking a sacred stick. The official purpose of these ordeals may be religious, but the physiological goal is to impel the initiate into a higher state of consciousness that kindles visions and insights, in a locale where survival may depend on a combination of ingenuity and nerve." 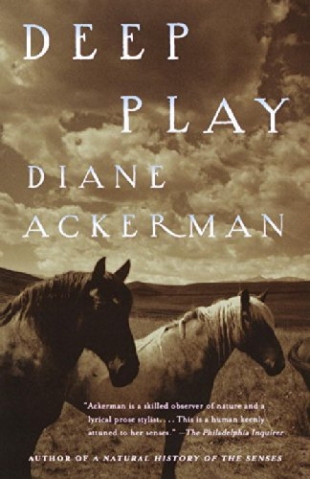