By Editors of Skylight Paths
Rosemary Radford Ruether on whether America's use of power is good or evil.

"The plans for war against Iraq are depicted as one more episode in an apocalyptic drama of good against evil, the angels of Light against the forces of Darkness, America as God's chosen people against God's enemies.

"What are we to say about the emergence of America as a superpower in the first decade of the twenty-first century? Is it a force primarily for human good or for evil? It is my belief that the direction charted by the Bush administration to direct American power toward global empire is a disaster both for the world and for the American people itself. It means dismantling many of the fragile structures of international cooperation designed to curb militarism and to foster social welfare, environmental health, and peace. It will further inflame hatred of the United States, both in the Islamic world and in much of the Third World, and will also antagonize many in Europe.

"This imperial agenda will also further distort the U.S. economy, delaying any reinvestment in needed infrastructure, education, health, and social welfare. The whole world, and finally ourselves, will be impoverished, both morally and economically, by this wrongheaded drive for imperial power. Above all, it must be questioned for its idolatrous moral absolutism, for its claims to represent good against evil, God against the Devil, resisting any self-critique of its own power. Not only critics from the Muslim world and the Third World, but also our European allies, are deeply offended by this direction of American power.

"American people themselves must challenge a domestic and foreign policy that guts our own traditions of democracy, human rights, and prophetic self-critique. We need a new generation of prophets to arise to denounce the misuse of American might for blatant power mongering and self-enrichment of the super-rich. Even more, we need new prophets who will redefine how American can become, once again, one nation among others in a world community that seeks 'liberty and justice for all.' " 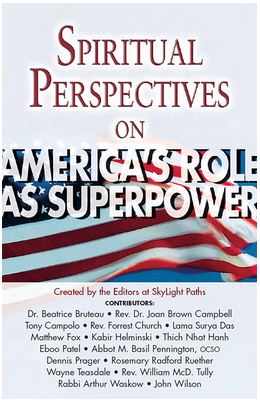