By Andrew Juniper
Andrew Juniper on the beauty of the Japanese aesthetic of wabi sabi, which has been called the art of impermanence.

"The wabi sabi aesthetic ideals which have been employed not just in the tea ceremony but in nearly every form of Japanese artistic expression, have come to represent a bridge between the trappings of the material world and the pull we all feel, to a greater or lesser extent, to a life of austerity and simplicity. If the spirit is ready and willing, then a three-line haiku poem set in the tokonoma (the traditional alcove), complemented by a simple yet perfectly balanced flower arrangement, should be sufficient to push the viewer's awareness to new heights and to help him or her find a serene balance between the joy of life and the inevitability of the waiting void.

"As with all art forms, it is the mental awareness of the audience that will dictate the outcome of the perception. For the Japanese, who have a long tradition of spiritual training and an appreciation for sublime simplicity, the beauty captured in the opening of a single bud or the patina of an antique bamboo vase will be far more evocative than an expression of wealth, power, or opulence.

"So without wishing to compromise the scope of the term wabi sabi, the following represents a personal interpretation that can only serve as a starting point for the potential implied.

"Wabi sabi is an intuitive appreciation of a transient beauty in the physical world that reflects the irreversible flow of life in the spiritual world. It is an understated beauty that exists in the modest, rustic, imperfect, or even decayed, an aesthetic sensibility that finds a melancholic beauty on the impermanence of things." 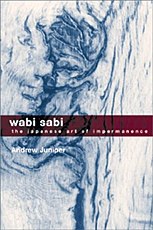