Sacred Necessities Gifts for Living With Passion, Purpose and Grace

By Terry Hershey
Terry Hershey's devotional efforts to be quiet and find the inner sactuary of her soul.

"When I lived in Southern California, I spent two or three days every six weeks retreating at St. Andrew's Abbey. I went to St. Andrew's because I wanted to practice the art of sitting still. Thomas Kelly writes that 'deep within us all there is an amazing inner sanctuary of the soul, a holy place, a Divine Center, a speaking Voice, to which we may continuously return.' I wanted to find that place. And I wanted to learn how to be alone with me and like it, because I wasn't very good at that, for I still was consumed by the paradigm of scarcity (never enough, striving, competition). It is no wonder that I perceived and evaluated myself by measuring motion and activity. I had swallowed — hook, line, and sinker — the cultural imperative that I would be graded by how busy I could be with matters of consequence, which meant being on the right vocational track and climbing the right ladder. In response, I received adulation, the affirmation that I too indeed was busy, and therefore, important.

"The only problem is that I didn't much care for the surcharge. I was living my days red-faced and anxious. On my first weekend at St. Andrews, I had high hopes. I was going to slow down, catch my breath, return to my hectic world rejuvenated. I had made plans for a forty-eight-hour Sabbath — in the Hebrew sense of the word, which implies a time and space of nothing, or a hallowed waste of time. So off I went, armed with books to read and sermons to write. I charged into the weekend. This, as Sabbaths go, was going to be enormously and satisfyingly productive.

"In The Solace of Open Spaces, Gretel Ehrlich tells it straight:

" 'We Americans are great on fillers, as if what we have, what we are, is not enough. We have a cultural tendency toward denial, but, being affluent, we strangle ourselves with what we can buy. We have only to look at the houses we build to see how we build against space, the way we drink against pain and loneliness. We fill up space as if it were a pie shell, with things whose opacity further obstructs our ability to see what is already there.'

"At lunch I had a conversation with Father Francis, my spiritual director, and told him of my high hopes. He made no attempt to dissuade me.

"After lunch, I returned to my room and laid down for a short nap. I woke up with a start, at six p.m.

"When I spoke to Father Francis, just before dinner, he asked how my day had gone. I was, to be sure, somewhat chagrined.

" 'Apparently,' I told him ruefully, 'I am flunking my Sabbath.'

" 'Help me with this,' he asked. 'Flunking your Sabbath must be a Protestant problem. What a terrible blight to live with, to flunk a Sabbath!' Then he couldn't help himself. He laughed and laughed, and laughed some more.

" 'Ah,' he responded. 'I see now. But it sounds like a good day to me. You said you came here to spend time alone. And that maybe while you were here you might try to listen to God. Well I doubt very much if you would have heard anything in the flurry of all your projects. It's a very good thing you took a nap. Maybe while you were quiet, God talked to you." 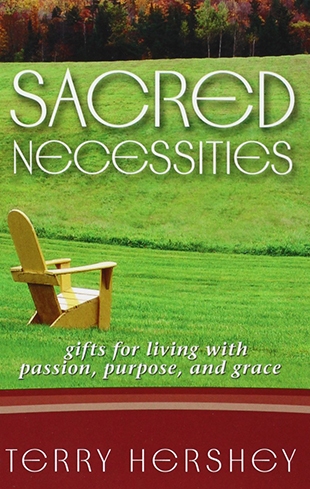