"She is the guardian of spirituality because her story, like so many of those pertaining to the divine feminine, reminds us that the journey of spirit is sometimes an act of reclamation and recovery, in which we rescue what has been covered up from the patriarchal past, and bring its truth and illumination to bear on the present. What we know about Mary Magdalene asserts — this time through the prism of the early Christian tradition — that the spirit of the Christian faith didn't always devalue the body or the feminine.

"As happened to the goddesses before her, what was once Mary Magdalene's especial, favored status became fully negated over time. Described in the New Testament as the first witness to the resurrected Christ in the Garden of Gethsemane, and described in the Gnostic Gospels as a priestess and acolyte, Mary Magdalene became known over time as the penitent whore. The change was so complete that institutions claiming to rehabilitate 'fallen women' — prostitutes and unwed mothers — became known as 'Magdalenes' in the United States and England. The familiar depiction of her at the cross, her face streaked with tears, became synonymous with cheap or 'maudlin' sentiment.

"Yet the woman revealed in the New Testament is a woman unafraid of looking into the heart of things; she expresses herself with physical gestures — she cries, she kneels, she touches. The Gospel traditionally ascribed to John describes Mary Magdalene moving toward the risen Jesus to embrace him — only to be told 'Touch Me Not.' She, not Jesus' mother, is the only female eyewitness to the central mystery of the Christian faith, the Resurrection; she is distinguished not only by her gender, but by the nature of her belief. Unlike Jesus' male followers, she needs no tactile proof to believe what she has seen; she is persuaded by the sound of Christ's voice alone.

"The Gnostics — losers in the battle for theological control of the Christian Church — saw Mary Magdalene as the embodiment of the feminine wisdom and spirit (Sophia) that animated the universe. Two of the surviving Gnostic texts — suppressed since the second century CE and only accidentally rediscovered in the middle of the twentieth century — reveal Mary Magdalene in other aspects. In 'The Gnostic Gospel of Mary,' the ascended Christ appears to Mary Magdalene — not to Peter, who objects as vigorously and jealously as a spurned schoolboy — and instructs her on how to direct his ministry. 'The Gnostic Gospel of Philip' paints the loving relationship between Christ and Mary Magdalene as intimate and physical. She was called Jesus' 'companion.'

"History belongs to the victors, and by the time the New Testament writings now known as Timothy and Acts were completed, Mary Magdalene was no longer counted among the apostles, who became an all-male band of twelve. When the resurrected Christ's appearances are catalogued in Acts, his appearance to Mary Magdalene in the garden isn't even mentioned. Yet we know that for centuries she was called 'The Apostle of the Apostles' and she 'Who Knew All.' In the early years of the first millennium after Christ, Mary Magdalene was the Christian successor to the ancient priestesses, oracles, and sibyls who preceded her. Long before her name conjured up the repentant sinner, she answered prayers and devotions as one of Jesus' true followers.

"Mary Magdalene the sinner is the bookend to the other Mary, Jesus' mother; the dualism of the two Marys — one the whore, the other the virgin inviolate — became the either/or standard for women that animated the Christian tradition and, by extension, became part of the vocabulary of the secular West. As such, Mary Magdalene is part of the backdrop of many cultural archetypes and mythologies pertaining to women. She became in time, the 'Whore with the Heart of Gold' — think Julia Roberts in Pretty Woman — beloved of Hollywood. Even her 'maudlin' behavior informs society's idea of what is feminine (weak and sentimental) and masculine (strong and tearless).

"But for those of us who are seeking a spirituality that will reflect our female identity — as Patricia Lynn Reilly phrased it so eloquently in the title of her book A God Who Looks Like Me — Mary Magdalene represents a spiritual history that can be reclaimed for the present and can restore wholeness to the divine feminine. Mary Magdalene is the only one of Jesus' followers mentioned in the Gospels who isn't described as someone's wife or mother. This may signal her independence, but it may equally reflect that her own status or that of her husband was so important that she needed no identification. Instead, she belonged only to the place she was born, a town called Magdala, meaning 'tower,' 'high place,' or alternatively, 'great.'

"Images of towers and cities once crowned the ancient goddesses, and the most holy places of the ancient religions were peaks and mountains; by her name, Mary of Magdala is located within that tradition. She teaches us that, in search of the spirit, we can lay claim to a vision of the feminine in which body and soul are united within the divine.

"Invite spirit into your life by honoring the feminine within you. Become more conscious of the harsh standards of beauty and perfection our society imposes on girls and women, and work on letting go of them. Loving yourself is the first step toward opening up the soul. Rediscover the feminine spirit through books such as Susan Haskins's Mary Magdalene: Myth and Metaphor or Patricia Lynn Reilly's A God Who Looks Like Me." 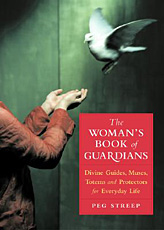