By Melvin McLeod, editor
Ken Jones on what to do about enmity according to Buddhist tradition.

"Enmity encompasses ill will, rancor, hostility, envy, bitterness, resentment, animosity, and much other mind-disturbing, guilt-inducing stuff. We may feel it in ourselves, or may be on the receiving end of it, or both. We may feel it toward a parent, child, or spouse; toward a co-worker or toward a public figure.

"Enmity can give Buddhists a lot of trouble. In many instances our enmity may make us feel doubt, regret, guilt, or even pain, especially when someone close to us is involved. At work it may add a disagreeable complication to the everyday demands of the job. And a sense of outrage about the public figures we love to hate does little for our sense of well-being and peace of mind. It is also likely to get in the way of a more objective understanding of what they are up to and hence of doing something effective about it.

"The difficulty with enmity is that in many cases there may appear to be very evident grounds for it, whether it be felt or received. We may be trapped in strong feelings of the injustice done to us, of the unreasonableness of another person. Surely we have some right to feel enmity toward them? Why not give them what they deserve, in a bloody good row, a thorough humiliation, a well-merited sacking, or even a bloody good revolution? And sometimes the sheer force of righteous outrage does appear to flatten the other party and resolve the problem.

"However, badly hurting a person or a social class or a movement, nation, or natural environment, commonly has a price. It is a paid over the years, poisoning perpetrator and victim alike. There is more than pious homily in the warning in the Dhammapada that 'Hate is not conquered by hate; hate is conquered by love. This is the eternal law.' The twentieth century has given us the appalling example of so-called 1914 — 1945 'war.' The Treaty of Versailles that concluded the First World War so humiliated and punished the Germans as to lead directly to Hitler's rise and the even more destructive Second World War. Usually, whether on the public or personal level, enmity leads not to an outright victory, but only to a deepening polarization, as in the long running enmities of Northern Ireland. And on the personal level, the unforgiving rancor of divorcing parents can blight several childhoods late into life.

"Another response to enmity is that we try to deny our feelings, or feel guilty about them. We may even develop a corrosive enmity against ourselves, because we don't feel as a good self should feel. This is the path of spiritual lobotomy, of the saint as zombie.

"But there is a third response to enmity, beyond either denial or letting it rip. For Buddhists the golden rule is always to look within first, to be scrupulously self-aware. For the present, forget the other. The feelings we experience are our feelings, not theirs. It is our problem (whoever else's it also is), something that we are carrying around with us and which is disturbing us. Just getting to this point of turning the question round may itself bring some relief.

"We do not usually respond to others as if we were dispassionate, reflecting mirrors. We respond as precarious, needy beings, struggling in the world to affirm some reassuring sense of self-identity. It is this that characteristically drives our feelings, perceptions, and behaviors, and, largely unbeknown, distorts our mirror view of others.

"In this connection the Buddha likened our discomfit to being struck by two arrows, when we believe we have been struck by only one. The first arrow is the objective ground for our enmity — the incident, the alleged injury, or whatever. The second is how we react to the blow — what it feels like for us. To be aware of this distinction is a vital step in the development of the practice of emotional awareness. Sometimes enmity may arise on the merest pretext. Probably most of us carry around with us in one pocket or another at least a bit of enmity ready for use. After all, surely someone or something must be responsible for the mess! Some books do have a quarrelsome smell about them. Over issues like veganism even Buddhists have been known to grow somewhat shrill.

"The most difficult and important stage in dissolving the experience of enmity lies in cultivating a level of awareness in which we are able to open ourselves clearly, intimately, and profoundly to the bare acceptance of that experience. Such emotional honesty can appear hurtful and threatening to our self-esteem, to our very sense of self. We therefore need to be no less aware of our characteristic evasions — fixating on the injury done to us, projecting our indignation on the perpetrator, trying to rationalize our emotional discomfort away (or just denying it altogether), beating ourselves up with guilt, and so on.

"Freed From Our Subjective Contamination of Reality

"As we learn to become intimate and accepting of our own feelings of enmity they begin to release their grip on us. We begin to view the objects of our enmity in their own light, as it were, rather than in ours. George Orwell warned that 'one cannot get away from one's subjective feelings, but at least one can get to know what they are and make allowances for them.'

"Accepting our feelings just as they are, we not only start to accept others (with their enmity) just as they are also, but also start to see more clearly the overall situation in which the mutual enmity occurs. The problem may then appear more as a situation to be resolved than another person or group to be corrected or punished or defeated. This revelation is commonly accompanied by a release of tension. Once we get the knack of this practice a new lightness of being is possible.

"Whether at the public or personal levels, none of the foregoing implies any endorsement or acceptance of wrongdoing or injustice. Instead it is about a shift in perception that empowers us to respond to the situation with a new clarity. Freed of what Orwell called 'subjective contamination' we are in a much better position to achieve a satisfactory resolution. Mahatma Gandhi, in his use of creative non-violence, was very clear about this. He was always adamant that there should be no compromise on fundamental, reasonable, and minimum demands for redress. To the extent that the adversary refused to meet such demands the struggle should resolutely be sustained. But it should no less be a struggle to deepen the adversary's awareness of the suffering and injustice that is being perpetuated, and to do so through mutual respect, genuine communication, and some recognition of common interest.

"A willingness to enter into authentic dialogue and a tireless search for an optimal resolution of the problem is the mark of the dissolution of enmity, in at least one party. Where there is a raging enmity the prospect of constructive dialogue is unwelcome, as a threat to the seamless righteousness with which one or both sides identify. Through such dialogue a constructive and mutually beneficial reconciliation is possible, as in the historic achievement of Nelson Mandela and F.W. de Klerk in South Africa, underpinned by the subsequent Truth and Reconciliation confessionals.

"I believe the two most important breakthroughs are when we can distinguish the arrow of affliction from the arrow of reacting to that affliction, and when we can take fun responsibility ourselves for the way in which we react to enmity, regardless of the alleged culpability of whoever we may hold responsible. This is nicely illustrated by a parable of the Taoist sage Chuang-Tzu. Rowing across a river our passage may be impeded by empty boats that have got adrift. These we push aside without concern. However, if there are people in the boats, although the problem is the same, we get angry and shout at them for willfully obstructing us.

"Through awareness and acceptance, enmity can be dissolved and reconciliation achieved. Beaming loving-kindness (metta) to the next crooked politician we see posturing on television may take longer. However, reconciliation does provide favorable conditions for the arising of loving-kindness and compassion, though best at first to people we can get to know well. And when our awareness practice makes us familiar and accepting of our own frailties, and we come to love ourselves, our hearts are opened more readily to accepting in fellow-feeling the frailties of others. 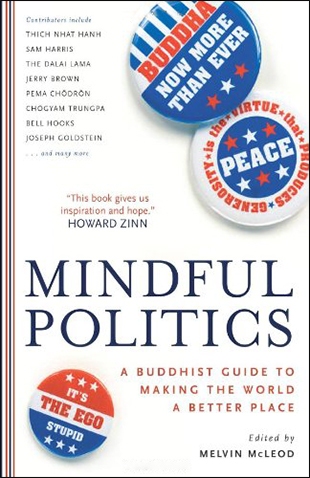