What Is Hinduism? Modern Adventures into a Profound Global Faith

"Hinduism's three pillars are temple worship, scripture and the guru-disciple tradition, around which all spiritual disciplines revolve. These include prayer, meditation and ritual worship in the home and temple, study of scripture, recitation of mantras, pilgrimage to holy places, austerity, selfless service, generous giving, the various yogas, and following good conduct. Festivals and singing of holy hymns are dynamic activities.

"Hindu temples, whether they be small village sanctuaries or towering citadels, are esteemed as God's consecrated abode. In the temple Hindus draw close to the Divine and find a refuge from the world. God's grace, permeating everywhere, is most easily known within these holy precincts. It is in this purified milieu that the three worlds — physical, astral and causal — commune most perfectly, that devotees can establish harmony with inner-plane spiritual beings. Traditional temples are specially sanctified, possessing a ray of spiritual energy connecting them to the celestial worlds.

"Temple rituals, performed by Hindu priests, take the form of puja, a ceremony in which the ringing of bells, passing of flames, presenting of offerings and intoning of chants invoke the devas and Gods, who then come to bless and help the devotees. Personal worship during puja may be an expression of festive celebration of important events in life, of adoration and thanksgiving, penance and confession, prayerful supplication and requests, or contemplation and the deepest levels of superconsciousness. The stone or metal Deity images enshrined in the temple are not mere symbols of the Gods; they are the form through which their love, power and blessings flood forth into this world. Devout Hindus adore the image as the Deity's physical body, knowing that the God or Goddess is actually present and conscious in it during puja, aware of devotee's thoughts and feelings and even sensing the priest's gentle touch on the metal or stone.

"Hindus consider it most important to live near a temple, as it is the center of spiritual life. It is here, in God's home, that the devotee nurtures his relationship with the Divine. Not wanting to stay away too long, he visits weekly and strives to attend each major festival, and to pilgrimage to a far-off temple annually for special blessings and a break from his daily concerns.

"For the Hindu, the underlying emphasis of life is on making spiritual progress, while also pursuing one's family and professional duties and goals. He is conscious that life is a precious, fleeting opportunity to advance, to bring about inner transformation, and he strives to remain ever conscious of this fact. For him work is worship, and his faith relates to every department of life.

"Hinduism's spiritual core is its holy men and women — millions of sadhus, yogis, swamis, vairagis, saints and satgurus who have dedicated their lives to full-time service, devotion and God Realization, and to proclaiming the eternal truths of Sanatana Dharma. In day-to-day life, perhaps no facet of dharma is as crucial as the spiritual teacher, or satguru. These holy men and women are a living spiritual force for the faithful. They are the inspirers and interpreters, the personal guides who, knowing God themselves, can bring devotees into God consciousness. In all Hindu communities there are gurus who personally look after the spiritual practices and progress of devotees. Such preceptors are equally revered whether they are men or women. In few other religions are women allowed such access to the highest seats of reverence and respect.

"Within the Hindu way is a deeply rooted desire to lead a productive, ethical life. Among the many virtues instilled in followers are truthfulness, fidelity, contentment and avoidance of greed, lust and anger. A cornerstone of dharma is ahimsa, noninjury toward all beings. Vedic rishis who revealed dharma proclaimed ahimsa as the way to achieve harmony with our environment, peace between people and compassion within ourselves. Devout followers tend to be vegetarians and seek to protect the environment. Selfless service, seva, to God and humanity is widely pursued as a way of softening the ego and drawing close to the Divine. Charity, dana, is expressed through myriad philanthropic activities.

"Hindus wear sectarian marks, called tilaka, on their foreheads as sacred symbols, distinctive insignia of their heritage. They prefer cremation of the body upon death, rather than burial, knowing that the soul lives on and will inhabit a new body on Earth.

"Perhaps one of this faith's most refreshing characteristics is that it encourages free and open thought. Scriptures and gurus encourage followers to inquire and investigate into the nature of Truth, to explore worshipful, inner and meditative regimens to directly experience the Divine. This openness is at the root of Hinduism's famed tolerance of other cultures, religions and points of view, capsulated in the adage, Ekam sat viprah bahuda vadanti, meaning 'Truth is one, the wise describe it in different ways.' The Hindu is free to choose his path, his way of approaching the Divine, and he can change it in the course of his lifetime. There is no heresy or apostasy, in Hinduism. This, coupled with Hinduism's natural inclusiveness, gives little room for fanaticism, fundamentalism, or closed-mindedness anywhere within the framework of Hinduism. It has been aptly called a threshold, not an enclosure.

"There is a false, concept, commonly found in academic texts, that Hinduism, is world-negating. This depiction was foisted upon the world by 19th-century Western missionary Orientalists traveling in India for the first time and reporting back about its starkest and strangest aspects, not unlike what Western journalists tend to do today. The wild-looking, world-renouncing yogis, taking refuge in caves, denying the senses and thus the world, were of sensational interest, and their world-abandonment became, through the scholars' eyes, characteristic of the entire religion. While Sanatana Dharma proudly upholds such severe ways of life for the few, it is very much a family oriented faith. The vast majority of followers are engaged in family life, firmly grounded in responsibilities in the world. Hinduism's essential, time-tested monastic tradition makes it no more world-negating than Christianity or Buddhism, which likewise have traditions, of renunciate men and women living apart from the world in spiritual pursuits. Young Hindu adults are encouraged to marry; marriages are encouraged to yield an abundance of children; children are guided to live in virtue, fulfill duty and contribute to the community. The emphasis is not on self-fulfillment and freedom but on the welfare of the community, as expressed in the phrase, Bahujan hitaya, bahujan sukhaya, meaning 'the welfare of the many and the happiness of the many.' " 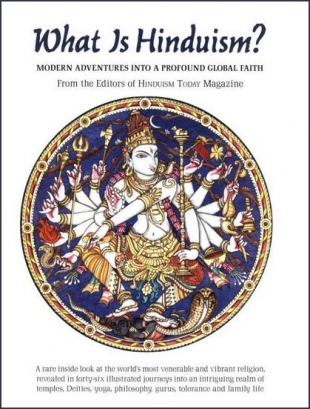