"The Hindu mala is composed of 108 separate beads, with an extra meru bead and a tassel marking the beginning of the cycle. The word meru recalls the mythological holy mountain at the centre of the Hindu cosmic universe and Lord Vishnu's heavenly seat. A sacred number in Hinduism, 108 marks the 12 astrological houses and nine planets of the Solar System.

"Like Christian and Muslim terms for prayer beads, mala signifies a rose, a garden or a heavenly garland. Such meanings attest to its ability to transport the believer into the heart's garden and offer blossoms to its deities. The mala's circular form operates as a microcosmic reminder of the universe's endless and fluid continuity. In marking off beads with the fingers, one gets a sense of lila, the rhythmic play of the universe, and in so doing, start to merge with the Divine presence. The Hindu universe is thought of as orderly and cyclical: using the mala allows the worshipper to experience this cosmic order in its immense complexity.

Sacred Materials
"No material is regarded as too lowly or precious to form mala beads; a stone daubed with paint on an Indian wayside shrine is revered as highly as the most finely carved and richly adorned temple deity. Certain materials, however, have inevitably become associated with the worship of specific deities.

"Wood is the first choice for malas, as it is for temple buildings, with sandalwood from Mysore ever popular. Vishnu worshippers use malas of small beads carved from the stem of the tulsi (holy basil) shrub. Thought to be the source of life's elixir, tulsi ('incomparable one') is honoured in household shrines. Its sacred associations predate Hinduism, but the history of the plant is so entwined with the mythology of Vishnu that each year, it is ceremonially married to the deity. A Krishna bead caps the 108-bead strand, exalting Vishnu's eighth reincarnation. The dairymaids, or gopis, who surrendered devotion to Krishna, also amount to 108.

"Rudraksha, the dried berries of the Elaeocarpus ganitrus roxburgii tree, have been associated with Hindu worship for at least 7,000 years, especially with Lord Shiva, and rudraksha mala beads are still used by devotees today. Each costly bead has several natural facets, or 'mouths', most often five, all representing separate Divine qualities. Held to be the tears of Shiva, rudraksha beads have a rough texture analogous to the ascetic's austere lifestyle of sannyasi, whereby all worldly possessions are renounced for an itinerant existence.

"Semi-precious stones, too, are considered suitable for malas, linking as they do deities with planets in jyotish, the Indian system of astrology. Ruby, for example, is the stone of the Sun and of Brahma.

The Power of Devotion
"A holy text, the Rosary Upanishad (800-400 BCE), prescribes a consecratory rite to spiritually endow the mala, which is thought to grow in spiritual potency with use by drawing energy from the reverence it is accorded. All malas, especially old ones or those used by holy men, are treated with special respect. If they touch the floor or another person, they are ritually cleansed. Care should be taken to never let malas be handled as objects of idle curiosity." 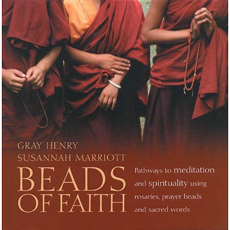