Surprises Around the Bend 50 Adventurous Walkers

"How do you get started — or restarted — on your own road to shalom, or wholeness of life? First, you must prepare. Ardath Rodale, writing in her book Gifts of the Spirit, tells of her daily walk along the ocean path while vacationing on the island of Maui, Hawaii. One morning she looked across the bay and saw 'a huge, fat, vibrant rainbow!' She came upon a mother and daughter also out for a walk. The mother, who had her head down while she talked, never noticed the rainbow until Ardath brought it to her attention.

"You need to be prepared, always anticipating that there may be gifts all around you, if only you have eyes to see. Preparation begins with a sense of expectancy.

"Second, you must persevere. Former Notre Dame football coach Lou Holtz, in his book A Teen's Game Plan for Life, writes about one of his players, Mike Brennan, who was the slowest football player he had ever seen. The players nicknamed him 'Turtle.' But Holtz, who did not like that expression, remarked, 'I thought that was very disparaging to the turtle.' Nevertheless, Brennan persevered and he found a way to use his strengths to offset his slowness. Eventually, he became a varsity player at Notre Dame and played for four years in the National Football League.

"You must learn to persevere and not give up when walking becomes tiring or boring. If the creative walkers in this book teach us anything it is that endurance is something that can be learned through consistent practice. Nothing can be more satisfying than to learn the art of LSD: long, slow, distance walking.

"Third, you need to personalize. Daniel Pink, in his provocative book A Whole New Mind, relates the story of a man who goes into a first-grade class and asks, 'How many artists are there in the room?' All the kids raise their hands. He repeats the question to second-graders, and about three-fourths of the children lift up their hands. When he asks the sixth-graders the same question, however, not a single hand goes up.

"Apparently, it does not take long to convince ourselves that we are not artists or, at least, that we do not want to admit that we are artists. Pink concludes that no matter what field we enter today, we must cultivate an artistic sensibility. He argues, 'We may not all be Dali or Degas. But today we must all be designers.'

"The challenge for you is to design your own walking style and program." 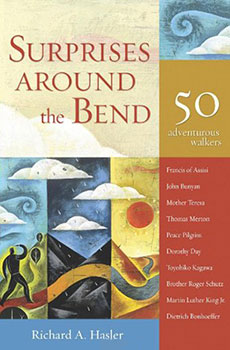