By Debbie Ford
Debbie Ford on finding a release for our shadow side.

"Let's think of our suppressed emotions and disowned qualities as human lava. Lava exists beneath the surface of the earth. If there are no steam vents at the earth's surface to release the pressure of the powerful force that lies beneath, its only outlet comes in the form of an eruption. Likewise, within our psyches our dark urges and impulses build up, and unless we find safe, healthy ways to release them, they express themselves in inappropriate and potentially dangerous ways. By acknowledging, accepting, and embracing our dark side, we create natural steam vents within ourselves. By providing an opening, we eliminate the worry about an explosion because we are allowing the pressure to be released in a safe and appropriate way. But when it is concealed in darkness, repressed out of shame, and denied out of fear, the shadow has no choice but to erupt. The mental and emotional outpouring that follows has less to do with our circumstances and who is around us than it does with our need to release the pressure.

"Our psyches naturally seek a release from the internal pressure caused by the repression of the disowned aspects of ourselves. This is why we are so obsessed with bad news, bad behavior, and especially the media's stories that exploit the downfall of people who are at the top of their game. Each time we hear one of these shocking tales of greed, lust, perversion, stupidity, deceit, or betrayal, we unconsciously get some internal release and relief from the pressure of our own dark side. When we see someone famous who is accused of molesting a thirteen-year-old boy, suddenly our own fascination with porn seems to pale in comparison. When our city councilwoman is caught shoplifting, cheating on our taxes seems insignificant. This obsession with darkness and failure in the media allows us to take momentary shelter in the hope that we are not as horrible as those we see portrayed around us. Yet our fascination with their darkness tells a different story.

"Consider the proliferation of reality television shows that allow us to voyeuristically observe the competitive, petty, and often mean-spirited behavior of the colorful cast of characters. We would not be so intrigued, so engrossed, and so compelled if we did not possess the same urges and instincts. When we are projecting onto others and judging their behaviors, our own suddenly don't seem that bad. Sometimes we look to the dark side of those around us for a sense of camaraderie and belonging. We see their shadow, and at some unconscious level we feel relieved that we are not the only ones who are acting out in that way.

"If we want to ensure that our dark side does not become the driving force behind our actions, we must first unravel the inner workings of our human operating system: what's included in the hard wiring, built in to every human being, and what is added on later as the software that gets programmed into each one of us. We must expose the two contradictory forces that exist within each of us: the force that compels us to expand our ability to give and receive love, to heed our inner voice and be a contributing member of our community — and the force that holds us back, sabotages our best efforts, and repeatedly steers us in a direction that is inconsistent with our highest goals and deepest values. This is the time to open our eyes to why good people — hardworking, committed, well-meaning, churchgoing, contributory people — do bad things; and to look with honest eyes at how we become our own worst enemy.” 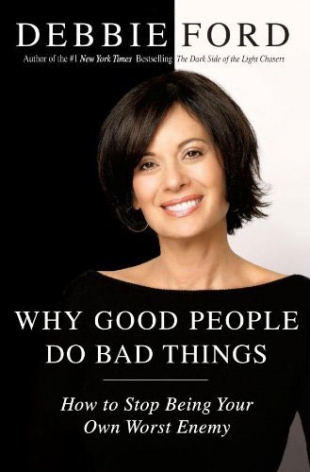