By Thomas Ryan
Thomas Ryan on taking to heart the practice of tapping our creative potential.

"Have you ever seen the play (or the movie) Man of La Mancha? It is based on the universally known picaresque romance Don Quixote by the sixteenth-century writer Miguel de Cervantes Saavedra. Cervantes, who wrote forty plays in twenty years, all of them failures, was excommunicated from the Church and served several jail terms on various charges. Aging and infirm, he wrote Don Quixote to try to make some money.

"Librettist Dale Wasserman hit on the idea of combining the stories of Cervantes and Quixote. What kind of man, Wasserman wondered, could suffer unceasing failures and yet in his declining years produce the staggering testament to the human spirit that is Don Quixote? Wasserman answered his own question by casting a play within a play. I'm going to take a few moments here to summarize the plotline because I believe it has many key insights into this whole business of creativity.

"Man of La Mancha opens with Cervantes in prison, awaiting trial by the Inquisition. The prisoners have decided to hold a mock trial in order to find him guilty and steal what seems to be a valuable package — which, in fact, is the manuscript of Cervantes's novel, Don Quixote.

"When asked, 'What is your crime?' Cervantes responds, 'I am a poet.'

"In an effort to save his work, Cervantes proposes to present his argument in the form of a play. The 'court' agrees, and Cervantes is determined to win his case by putting the prisoners in touch with their poetic souls. By engaging them in the play, he hopes they can gain access to a part of themselves that has truly been 'in prison.'

"Donning costume and makeup, Cervantes plays the role of a country squire named Alhonso, who has decided to transform himself into 'Don Quixote,' a knight on a quest. As Don Quixote, he leaves what society considers sane behavior to dedicate himself to righting the wrongs of the world and to call people to accept their inner gifts, which they no longer recognize.

"On the road Don Quixote finds himself in a country tavern, where he encounters a barmaid named Aldonza, who appears to be the projection of his poetic soul — or his 'inner feminine,' to put it in Jungian terms. He sings to her, 'I have dreamed thee too long . .  Thou hast always been with me but we have always been far apart.'

"The people in Don Quixote's life do everything they can to get him to 'accept reality,' to operate from the earn-your-living-and-be-sensible side of his mind. But he will not let go: 'I come in a world of iron to make a world of gold.' And he encourages them to have the courage to follow the quest for their own deepest longings, singing 'the world will be better for this' in the song 'To Dream the Impossible Dream.'

"Back in the real world of the prison, the inmates and the kangaroo court are doing their best, as well, to get Cervantes to accept that real life is different from his poetic vision of it. One inmate tells Cervantes to write the visionary and the poetic out of his life, to throw away his manuscript, to douse the fire that burns within him.

"As the play-within-a play continues, Don Quixote seems to have accepted this reality. The old man who had once tilted valiantly at windmills has returned home and is dying. He has cut off his creative self and is in the process of a lingering death of the soul. But his creative force, his intuitive feminine, fights hack in the person of Aldonza, who insists on seeing him on his deathbed. She testifies how his living out of his creative self and his vision of the beauty and goodness in people has made a difference in her life. In a stirring deathbed scene, Don Quixote's poetic self and his practical self are reconciled, and he dies a whole person, going out in a blaze of glory.

"Back in Cervantes's dungeon, his fellow prisoners are deeply affected by his story and restore to him his precious manuscript. When Cervantes is summoned to his real trial by the Inquisition, the prisoners unite to sing him on his way with 'The Impossible Dream.'

"I think one of the reasons Man of La Mancha enjoyed such a long run on Broadway (and later in movie form) is that it touches a place deep within us where we know there are more possibilities to our lives than we are living. This classic adventure suggests that we, too, can live our 'impossible dream' if we take to heart the practice of tapping our creative potential." 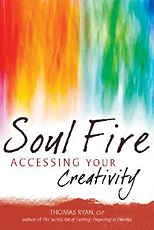