Mentoring Tip #1: Take a Few Moments Each Day to Make Sure Your Heart is Open

"Some of the most amazing opportunities to help someone who has been feeling left out or excluded occur without warning. Say you're walking down the street when an anxious stranger approaches you and asks you for directions. If you are too rushed to respond to this vulnerable individual with kindness, you might unintentionally be sending out the unspoken message 'You don't matter very much.' Even if you have no conscious desire to do harm, your indifference will still indicate powerfully to this person that he or she is somehow unworthy. Is that what you want to be communicating?

"Many years ago I heard the Nobel Prize winner Desmond Tutu speak about growing up in South Africa under apartheid, where his brown skin meant his opportunities in life were supposed to be severely restricted. Someone in the audience asked him, 'Why did you choose to become a priest in the Anglican Church, which is made up of the same people as those who are part of the oppressive ruling class?'

"Desmond Tutu smiled and replied calmly, 'That's very easy to answer. When I was a young child I saw a white man tip his hat to a black woman. Please understand that such a gesture was completely unheard of in my country. The white man was an Anglican bishop and the black woman was my mother.'

"That one vivid memory was the beginning of a lifelong connection between young Desmond Tutu and a religious group that he could easily have assumed would exclude him. Yet he not only chose to become a member of that particular denomination, he eventually became the revered archbishop of his nation.

"Is it possible that just one sincere moment of opening your heart — an act as simple as showing genuine respect to a stranger — can become a life-changing breakthrough, not only for one family but also for an entire society? It makes you wonder what unintended impressions you and I are creating each day in the way we treat the strangers we encounter, or even in the way we treat a friend or a loved one who is feeling alone." 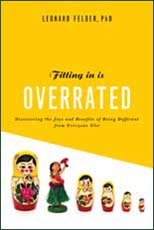