Child, Victim, Soldier The Loss of Innocence in Uganda

By Donald H. Dunson
Donald H. Dunson's story of Archbishop John Baptist Odama's request for forgiveness from children, before they were mature enough to realize they had been wronged.

"On my African sojourns, I have lived among a people who bear some of the most crushing burdens in the human family: the preventable deaths of young and old alike from violence, disease, hunger, and abject poverty, and the pain of living without the sense of a peaceful future. Amidst all these intractable foes there is a terrible temptation to place blame solely on others. It must all be the fault of the rebels, the government, the international community for its noninvolvement, the greed of those who fail to share food and medicine, and so on.

"Some people look to themselves instead of blaming others for a world gone horribly wrong. Archbishop John Baptist Odama, the Roman Catholic bishop of Gulu, is such a person. When he meets with the children he will at times kneel before them and ask for their forgiveness. He says: 'Forgive me; I should have done more to build you a safer and more peaceful world.' The children are shocked to see their shepherd on his knees before them.

"On one occasion, while preaching at a large Confirmation Mass at Awach, a sprawling camp for thousands of people displaced by this war, Archbishop Odama asked all the children to stand. 'Little ones, you stand up!' There were many adults present, even high-ranking military personnel, who were very curious about this unexpected turn of events. In his fatherly tone of voice he spoke directly to the youth and to them alone: 'The condition in which you are growing up is wrong. You lack food, you are dressed poorly, and some of you are very sickly. You have missed your future because you are missing education. You walk in fear. I am sure when you grow up you will ask, "Why did this happen? Where were our elders to help us and protect us?" I say to you: "I apologize. I could have done more for you to improve your situation. Forgive me." ' Then he knelt before them.

"I imagine the children received a glimpse of what the disciples felt at the Last Supper when Jesus, their teacher and master, knelt before each of them in order to wash their feet. Peace is built from such humble acts of solidarity and love." 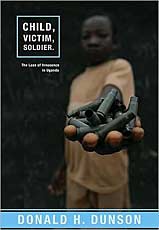