By Diane Ackerman
A tribute to the many forms of silence and a description of a Balinese day of it.

"A friend has invited me on a silent retreat. Relatively silent. After all, the birds would still sing and call, the leaves rustle, the cicadas scrape, the wind sough. Exclude them, leave the galaxy even, and there's still the background hiss from the Big Bang which radio telescopes record as a sort of hoarse streaming sigh. I mean human silence, which on this retreat also includes turning off the wordless communications, what the Japanese call haragei (pronounced ha-ra-GAY), body language, gesture, facial expression, a telling glance.

" 'Soon silence will have passed into legend,' sculptor Jean Arp warns in Sacred Silence. 'Man has turned his back on silence. Day after day he invents machines and devices that increase noise and distract humanity from the essence of life, contemplation, meditation. Tooting, howling, screeching, booming, crashing, whistling, grinding, and trilling bolster his ego.'

"Once a year, on a changing day in April, people in Bali celebrate Nyepi (pronounced nn-YEH-pee), a national day of silence that follows the dark moon of the spring equinox and ushers in the Balinese New Year. On this Hindu holiday, both car and foot traffic are prohibited (except for emergency vehicles), radio and TV must play low if at all; village wardens keep people off the beaches; work, socializing, and even lovemaking stops, as a nation sits and falls silent together, for one day of introspection in an otherwise hectic year. Not only does the dawn sound different, it smells different. Without the reeking exhaust from cars and trucks masking subtler scents, the air smells naturally floral, and it's enriched by the green aromas of vine-clad forests.

"During Nyepi, surrounded by the incense of wildflowers, one mulls over values, beholds the balance of nature, meditates on love, compassion, kindness, patience. Dogs bark, cicadas call shrilly, but the streets breathe a quiet rare for that clamorous island, a silence framed like a painting. Not the silence of deep space, nor the hush of a dark room, but an achieved silence, a found silence that's refined and full. The Japanese word for silence, mokurai, combines moku, silence, with rai, thunder, creating a sense of silence as a powerful force, a reverse thunder. One doesn't fall silent when tasting impermanence — the sting of everything appearing, disappearing, and changing from moment to moment — but undergoes silence, creates silence, becomes silence.

"Death is the silence in an invisible valise carried under one arm. As we walk, an elbow leaves room for it. Through a window I see quaking aspens fidgeting silently (the glass baffles noise) in a dumb show of shivering leaves. Surely my death will dawn like that: first the aspens will flicker; then the scene will fade to black and white; leaves will spin even faster in the wind, but silently, and I will have been." 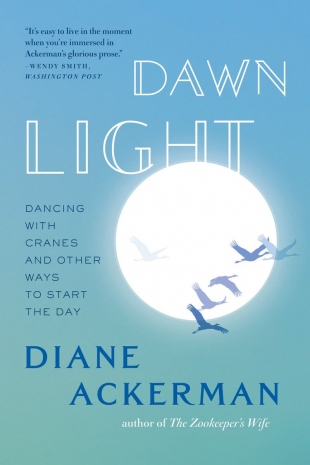