A Book of Silence

"Over and over again, for nearly ten years now, I go back to Janet Batsleer's letter and wrestle with it: 'Silence is the place of death, of nothingness . . . All silence is waiting to be broken.'

"Silence is a lack, an absence, a void — silence is the negation of speech, and therefore of meaning and freedom. In the beginning was the word. I go on being certain that this is wrong, but I cannot pin down quite why it is wrong. I have been collecting and experiencing so many strongly positive instances of silence, moments in human experience where there is no speech, no noise, but clearly no sense of loss or deficiency. I don't mean just my own 'happy moments' of silence, but more widely acknowledged cultural moments.

"There is the exquisite intimacy between mother and infant at the end of the night feed, when the baby is contented, on the edge of sleep, and you are there with it and with yourself.

"There are those awed responses to certain demonstrations of the 'natural' world, in which words, and even normal emotional reactions, fail or rather step back from the experience. Some natural phenomena, even though silent in themselves, tend to bring on sensations of peace or contentment, rather than awe and ineffability. For the full effect of the sublime to work there has to be an element of power and of something essentially inhumane. Different phenomena do it for different individuals: mountain ranges, meteor showers, large waterfalls and long views from high cliffs are examples of the kind of silencing events I am thinking of here.

"There is the positive psychoanalytic silence that seems to allow a new kind of self-knowing and recreation of the wholeness and integrity of an individual.

"There is the aftermath of seriously good sex, when you are with the other person without demand or need. In fact, there is a silence around sex, which is quite other than the silence of shame. There is something about sexual passion that language cannot comprehend or represent and at its best there is no reason to try.

"There is the silence of mystical experience, in which the silence becomes the content as well as the context and which is felt to be ineffable, somehow impossible to pull into language.

"There is the silent, even ecstatic, euphoria which so frequently precedes psychotic, and indeed epileptic, episodes. I feel that perhaps this is the same silence as mystical silence, but contemporary culture has rigorously separated them.

"There is the particular silence in some sorts of reading where a balanced communication is created and the generous-hearted writer opens the silent space for the attentive reader and the two of them work (or perhaps play) at meaning-making together.

"There is the silence in listening to music — especially instrumental music (as opposed to the human voice). Music is complicated in this context. If music is an aural language 'intelligible but not translatable' as Anthony Storr has called it, or even more crudely a set of sounds, in what sense can it be called 'silent'? This is why I have emphasised listening to music, rather than the music itself. A silencing of the heart and mind, and an inability to speak about its meaning, emotional or intellectual, while being very clear that it has an important meaning, is a common response to certain kinds of music, and it is one of the cultural experiences that people come up with frequently if you ask them about positive experiences of silence. Sometimes I think that music mediates between silence and language; sometimes I see it as a particular language of its own — like BSL (the most common hand/eye, as opposed to mouth/ear, language of the British deaf community) or mathematics.

"There are the great cosmic forces, on which we depend, although they are silent and indeed invisible: light, organic growth, gravity, electricity, tides, rotation, the movement of the tectonic plates. Air, earth, fire and water.

"There is the silence of death.

"All these silences have some quite specific things in common: for example, a sense of 'givenness' — that this experience comes from 'outside' the normal self and cannot be commanded or controlled, though it can be evaded or avoided. At the same time they are experienced as integrative; the whole self is engaged and known to itself, in a new way. Even more common and profound is the lack of boundary — people feel they are outside watching themselves, 'from a great height', but without any sense of separation or split. A grasp of the difference between Self and Other, between I and Thou becomes unclear — except that there is no loss of integrity. It is usually the reassertion of the ego, of self-consciousness, that brings this state to an end." 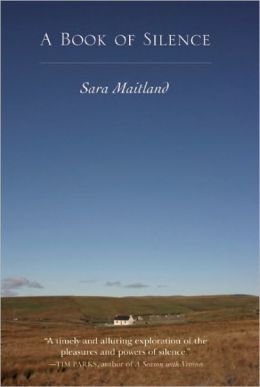