"One of the essential qualities of collective wisdom is a palpable sense of connection with each other and to larger forces that is found, for example, in nature, in relationship to our ancestors, and even in relation to a physical place. Often these experiences are grounded in group members' understanding of the sacred, however defined by the individuals and the group. Carol Frenier, an author and an active participant in the Collective Wisdom Initiative, was interviewed by Craig Hamilton several years ago for an article about the growing interest in this phenomenon. During her interview, Frenier observed: 'In these group experiences, people have access to a kind of knowing that's bigger than what we normally experience with each other. . . . You feel the presence of the sacred, and you sense that everybody else in the group is also feeling that.'

"People who talk about their experiences of collective wisdom often report a sense of openness and awareness of something larger than themselves. The ability to communicate seems broader, and people are often astounded by the creativity that comes forward. 'You have a sense,' Frenier observed, 'that the whole group is creating together, and you don't quite exactly know how.'

"This experience of connection, when it arises, often expands or dissipates our experience of boundaries — boundaries between different parts of ourselves, between ourselves and other members of the group, between our group and others outside of the group, between what is personal and what is universal. In a second interview conducted by Hamilton, a woman observed: 'In the group, I experienced a kind of consciousness that was almost a singularity, like a dropping of personalities and a joining together where there was no sense of conflict. Nobody was in opposition and everybody was just helping each other. It became obvious that we weren't responding to individual personalities but were responding to something much deeper, much more real in each other that was collective, something that we shared — a commonality, really.' " 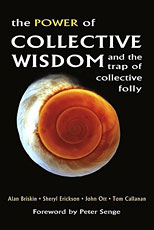