Traveling with Pomegranates A Mother-Daughter Story

By Ann Kidd Taylor, Sue Monk Kidd
A reflection by Sue Monk Kidd as she approaches age 50 on the desire to make a pilgrimage.

"Finally, I began to write about becoming an older woman and the trepidation it stirred. The small, telling 'betrayals' of my body. The stalled, eerie stillness in my writing, accompanied by an ache for some unlived destiny. I wrote about the raw, unsettled feelings coursing through me, the need to divest and relocate, the urge to radically simplify and distill life into a new, unknown meaning. And why, I asked myself, had I begun to think for the first time about my own mortality? Some days, the thought of dying gouged into my heart to the point I filled up with tears at the sight of the small, ordinary things I would miss.

"Finally, I wrote a series of questions: Is there an odyssey the female soul longs to make at the approach of fifty — one that has been blurred and lost within a culture awesomely alienated from soul? If so, what sort of journey would that be? Where would it take me?

"The impulse to go to Greece emerged out of those questions. It seized me before I got back to the minuscule apartment. Greece. That would be the portal. I would make a pilgrimage in search of an initiation." 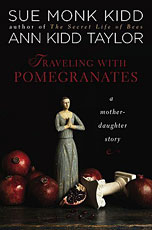