By Sara Miles
Sara Miles on the meaning of new life as promised by Jesus.

" 'Proclaim that the kingdom of Heaven is at hand,' Jesus tells his disciples, before he goes to his end, instructing them to go forth and raise the dead. 'You've received freely, now give freely.'

"Of all the things I thought I heard Jesus telling me to do, raising the dead was the most impossible to take literally. The resurrection was a logical sticking point for those who didn't accept Jesus as divine, and even for many believers it had become merely a metaphor or a statement about principles. But I believed it: other things I'd thought of as metaphorical turned out to be real. Communion was food. Healing was touch. When I received love, freely, I wanted to give it away in the same spirit.

"Yet what could it possibly mean to raise the dead?

"I knew a little bit about new life, because I'd seen it shine in people. . .  I'd even discovered, to my great surprise, some new life of my own, albeit mixed up messily with leftovers from the past, surprising me: Did you ever imagine you'd wind up here?

"In my new life with the Boyfriend [Miles' colloquial name for Jesus], I wasn't particularly nicer, but I was freer. I wasn't more holy, but I felt more blessed. And I knew that to the extent new life was real in any of us, it had sprung, just as Jesus promised, from actual feeding, healing, forgiving. It didn't come from the sky, but from plates of enchiladas, the bruises of strangers, frustration and tears. Follow me, Jesus had said: just give the people something to eat, just touch them, just say you're sorry. And our lives had changed." 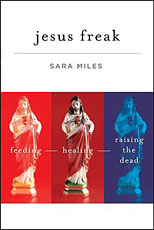