Be Very Afraid The Cultural Response to Terror, Pandemics, Environmental Devastation, Nuclear Annihilation, and Other Threats

By Robert Wuthnow
Robert Wuthnow on the quest for meaning during times of extreme peril when people feel anxious about disasters and potential catastrophes.

"For more than six decades, humankind has lived with the knowledge that it could be the agent of its own annihilation. We are constantly reminded of crises, large and small, present and anticipated. What effect has this awareness had on us? How have we responded?

"The simple answer is that we have responded quite aggressively. Faced with the possibility of nuclear annihilation, terrorism, and the prospect of pandemics, we have hardly sat back and done nothing. We have rolled up our collective sleeves and spent billions — billions waging the Cold War, billions fighting terror, and billions on vaccines and medical research.

"Now that climate change is seen as a threat to our very existence, our response is the same. Plans are in the works to spend billions of dollars seeking solutions. Everything from wind power to fuel-efficient vehicles is on the table.

"Critics argue that a lot of the money will be spent needlessly. Some point to preparations for the Y2K (the year 2000, or millennium bug) crisis and to pandemics that never materialized. The problem, some argue, is that big government bureaucracies have come into existence, and the bureaucrats at these agencies are promoting fear to fatten their budgets.

"But of course that argument is too simple. Climate change really does threaten our existence. Millions could die from a pandemic or a dirty bomb strategically planted in a metropolitan area. We do need action to prepare for and guard against these threats.

"The crux of the matter is this: We have a built-in propensity to act, but we need to engage in the right actions. We err so often because we are like generals fighting the last war. Terror strikes and we respond as if we are resuming the Cold War. Avian flu appears and we look to the epidemic of 1918 for guidance. Government agencies notoriously do so, but we as citizens do too. A threat appears and we buy duct tape because we did that the last time.

"The complicated part is figuring out why we so often respond inappropriately. One reason why is that peril is terrifying and causes us to react with our emotions. Also, we respond less effectively than we might because it is difficult to assess risks. These are contributing factors, but they do not get at the real issue.

"What has to be understood is that our responses to peril are fundamentally driven by the need to make sense of our very humanity. They are not just about solving the next crisis but about who we are as a people and as persons. How we respond tells us that we have courage, that we can overcome vulnerability, and that we can go ahead with our lives in the midst of adversity. Our responses speak to the basic fragility of the human condition.

"Peril is the mirror we hold up to ourselves. It forces us to ask what it means to be human. It focuses our attention on the shortness and uncertainty of our lives. We imagine the worst — death, the death of our children, the destruction of our way of life. Would we be able to withstand the suffering? Would our cherished institutions fail? Would chaos erupt?

"Living with the prospect of devastation, even annihilation, as we have for more than two generations, has shaped our entire culture. We have created and live in a culture of peril. When a major event happens and when some new threat appears on the horizon we devote an enormous amount of effort to making sense of the event — and of ourselves. And as we do that, some of what we learn is narrowly applicable to the next crisis that comes along, but much of it is not. It has to do with our sense of vulnerability and our desire to believe in our way of life. We have to sort out what is applicable and what is not." 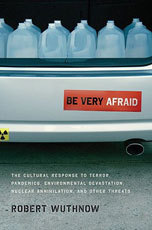