The Woman Who Lived with Wolves & Other Stories from the Tipi

By Paul Goble
Paul Goble retelling the Mandan story of nature, or The Old Woman Who Never Dies.

The Old Woman Who Never Dies

"In the late summer, when the crops were ripening in the Mandan gardens, the women would build log platforms in the shade of trees beside their gardens. From there they overlooked their crops, to guard them from the flocks of blackbirds seeking to enjoy the harvest. There was corn, beans, gourds, and melons, and also generous patches of squash, which they cut into thin slices and dried to eat in the winter. The women would take it in turns to stay out by the gardens all day long. Sometimes whole families gathered at the platforms, but usually women were alone. They sang to the ripening corn, and they would not feel lonely.

"Once a young woman, who was guarding her garden, was captured by enemy warriors. They took her to their village, far away.

"Months passed, and then one springtime she escaped. She walked for many days, always hurrying, fearful her captors would overtake her. Just when she felt she would never see her home again, long lines of geese, and flocks of ducks and swans, flew low overhead, singing cheerful songs encouraging her to go on.

"They sang to her about the Old Woman Who Never Dies, who every spring sends out the multitudes of water birds. They tell people it is time to plant their gardens: rows of corn like lines of flying geese, beans as many as the flocks of ducks, squash and gourds like beautiful swans. The cheerful geese sang honoring the Old Woman Who Never Dies, telling that it is she who blesses the gardens and makes them grow.

"When the young woman reached home again, she taught her people the songs which she had learned from the geese. Ever since that time, each springtime, when the water birds returned, women would gather together to sing the songs, to feast, and pray to the Old Woman Who Never Dies, that she would bless their gardens." 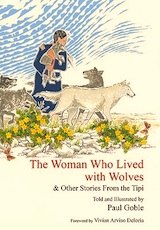