"Some observations about saints:

"Saints should be judged guilty until proven innocent. (Orwell)

"The saints tell us that even in this way one can follow Christ. (Karl Rahner)

"Recently, a newspaper reporter called me to ask if Saint Michael was canonized. I explained that, like the apostles and many others, the angels were accepted as 'holy,' and from the Greek root (hagios), we get both holy and saint. Many (if not most) of the saints invoked in the church were never formally canonized since the canonical process of canonization was a late development in the Church.

"I am also partial to the notion that many (multitudes!) of saints live among us, but we have constructed no liturgical services to honor them.

"I am also very dubious about the speed with which the Vatican has recently proceeded in matters of beatification and canonization, since many of these processes hold up persons for whom the overwhelming number of believers have no knowledge of or interest in." 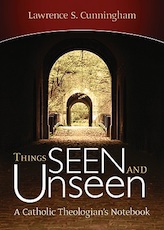