By Kay S. Hymowitz
Kay Hymowitz on preadults having the feeling of being in continuous transition.

"In the United States since the middle of the twentieth century, the usual biography went like this: 1. childhood and schooling; 2. adolescence and end of schooling; 3. a job (for men always, for women sometimes); 4. marriage; 5. children; and 6. old age and the great beyond. There were individual choices within the confines of the script. Number 4, for instance, the identity of one's spouse, was a major decision in people's lives. People generally made that decision in their early or mid-twenties, meaning by that time — certainly by thirty — they were full-fledged grown-ups, settled and already raising the next generation to follow the same script they had.

"By contrast, today in your twenties and early thirties you are probably still only booting up. These are the years you figure out what to do with your life, to write the outlines of your own personal biography, and in the current environment, that takes some trial and error. Young people wander from job to job while they try to decide what kind of career they want. They move from apartment to apartment, city to city, country to country, sometimes adding an extensive pit stop in their childhood bedrooms, while they figure out where they want to settle. They go through one-night stands, dates, girlfriends and boyfriends, multiyear live-in relationships, breakups, and even 'starter marriage' divorces while they decide with whom, if anyone, they should spend their lives. They decide when to start a family. Or they decide never to start a family. You write your own script, design your own plan. 'Work How You Want, Live Where You Want, Be What You Want to Be,' goes the motto of a website weirdly but not inaccurately called 'the Untemplater.'

"The slow road to adulthood has been under construction since the late 1960s but only in the last ten years have its main features become clear enough for social scientists to conclude that we are witnessing the appearance of a new stage of life. The twentieth century gave us adolescence; the twenty-first — give or take a decade — is giving us the single twenty- and thirtysomething. Jeffrey Arnett, a professor at the University of Maryland whose books and conferences make him the top academic entrepreneur on the topic, has labeled the phase 'emerging adulthood.' Others refer to 'the transition to adulthood,' or 'not quite adults.' The popular media has tried out terms like 'adultescence,' 'quarterlife,' 'boomerang generation,' and 'twixters.'

"I prefer the term preadulthood. Without stable employment, quasi-permanent independent residence, wives, husbands, or children, 'adult' seems premature. Preadults themselves have the feeling of being in transition. True, these days 50- or 60-year-olds might grapple with the same sentiment, but they're kidding themselves. Even today when grown-ups commonly divorce and remarry, retrain, and move from Boston to Seattle, we still think of the adult as having a stable identity. Preadults, on the other hand, are undefined and unformed. Neuroscientists would confirm the truth of this for at least younger twentysomethings because their brains are still developing. They may be legally adults and, if necessary, capable of fending entirely for themselves, but they lack the social identity that comes with being settled into a home, occupation, and marital family that humans have almost always associated with adult maturity. Preadults are not there yet." 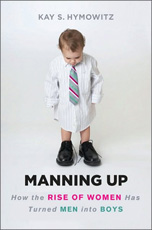