"When things we care about fall apart, heartbreak happens. In my sixty-fifth year, it was happening, again, to me. I soon began to realize that this episode was darker than most of those I had known before: I was descending into depression, my third time down as an adult. Clearly I am predisposed to this form of mental anguish, so I cannot claim that heartbreak was the sole source of my misery. But neither can I attribute the whole of this episode to brain chemistry or genetics. There are times when the heart, like the canary in the coal mine, breathes in the world's toxicity and begins to die.

"Much has been said about the 'voice of depression.' It is a voice that speaks despairingly about the whole of one's life no matter how good parts of it may be — a voice so loud and insistent that when it speaks, it is the only sound one can hear. I know that voice well. I have spent long days and nights listening to its deadly urgings.

"Less has been said about the life-giving fact that, as poet Theodore Roethke writes, 'In a dark time, the eye begins to see.' During my sojourn on the dark side, it was hard to believe that my vision was growing sharper or to make sense of what I was seeing. And yet as I slowly came back to life, I found that I had gained new clarity about myself, the community I depend on, and my call to reengage with its politics and relearn how to hold its tensions in a life-giving way.

"During my recovery, I discovered a book that helped me understand how heartbreak and depression — two of the most isolating and disabling experiences I know — can expand one's sense of connectedness and evoke the heart's capacity to employ tension in the service of life. Lincoln's Melancholy, by Joshua Shenk, is a probing examination of our sixteenth president's journey with depression. What was then called 'melancholy' first appeared in Lincoln's twenties, when neighbors occasionally took him in for fear he might take his own life. Lincoln struggled with this affliction until the day he died, a dark thread laced through a life driven by the conviction that he was born to render some sort of public service.

"Lincoln's need to preserve his life by embracing and integrating his own darkness and light made him uniquely qualified to help America preserve the Union. Because he knew dark and light intimately — knew them as inseparable elements of everything human — he refused to split North and South into 'good guys' and 'bad guys,' a split that might have taken us closer to the national version of suicide.

"Instead, in his second inaugural address, delivered on March 4, 1865, a month before the end of the Civil War, Lincoln appealed for 'malice toward none' and 'charity for all,' animated by what one writer calls an 'awe-inspiring sense of love for all' who bore the brunt of the battle. In his appeal to a deeply divided America, Lincoln points to an essential fact of our life together: if we are to survive and thrive, we must hold its divisions and contradictions with compassion, lest we lose our democracy.

"Lincoln has much to teach us about embracing political tension in a way that opens our hearts to each other, no matter how deep our differences. That way begins 'in here' as we work on reconciling whatever divides us from ourselves — and then moves out with healing power into a world of many divides, drawing light out of darkness, community out of chaos, and life out of death." 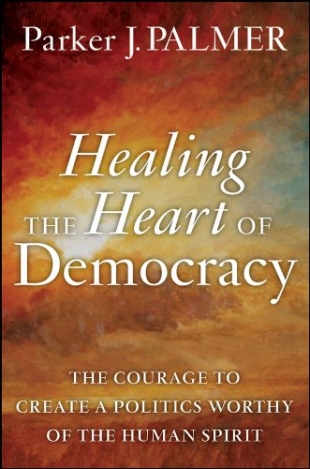