Contemplative Crochet A Hands-On Guide for Interlocking Faith and Craft

"Perhaps one of the oldest postures for prayer, called the orans position (which comes from the Latin word for 'praying'), is one of standing with raised open hands. Orans means 'one who prays' in Latin and is represented 153 times by pictures in the Roman catacombs. Orans is a common gesture in Eastern churches, Jewish synagogues, and many Western churches.

"Folding hands in prayer is a ubiquitous hand gesture found in Christianity, Hinduism, Buddhism, and religions of Tibet and Japan. In India, this gesture goes hand-in-hand with the word Namaste, which translates as 'I bow to the divinity within you from the divinity within me.' In the practice of yoga, it is thought that bringing hands together brings the left and right hemispheres of the brain together and calms the mind.

"In Hinduism and Buddhism, mudras (from a Sanskrit word meaning 'seal') are an important part of religious practice. There are hundreds of these symbolic hand gestures, and each has a specific meaning. Mudras have been practiced throughout history, and we have evidence dating as far back as 1500 BCE that hands were used in religious expression: the Egyptian deity Ra was shown as a sunburst with each ray terminating in an open hand. In Islamic mysticism, hand gestures are often used to help produce an altered state of awareness. Sufi dervishes pose their hands in specific mudralike signs while dancing, and some Sufi sects trace the ninety-nine names of God on their bodies with their right hand while engaging in zikir, or focusing upon God through chanting.

"The sign of the cross is a ritual hand motion that many Catholics use to trace the shape of the cross in the air or on the body. The sign can be made by individuals as a form of prayer, or by clergy as an act of blessing. The hand sign known as the Christogram is considered the original sign of the cross, and this form of mudra can be seen in many Renaissance paintings and murals of Jesus, the saints, and priests. Today, this sign of benediction — made by extending the thumb and first two fingers and folding the ring and little fingers onto the palms to form the Greek letters ICXC (the Greek name for Christ) — is used mainly by priests in the Eastern Orthodox Church. A similar gesture is known in Hindu and Buddhist traditions as the prana mudra, a symbol of healing.

"This hand gesture is an ancient Jewish custom that accompanies the Birkat Kohanim, or 'Priestly Blessing.' The blessing is made by spreading the hands into two V shapes, in the form of the Hebrew letter shin, and it symbolizes the light of the Shekhina, or Presence of God.

"The Hamsa, or 'Hamesh hand,' is an ancient symbol used as a protective amulet by both Jews and Muslims. The name hamsa comes from the Semitic root meaning 'five,' and in Jewish use it is sometimes called the Hand of Miriam, after the biblical heroine.

"Called the Hand of Fatima by Muslims, this hand sign is named for the daughter of Muhammad, and is sometimes said to symbolize the Five Pillars, or tenets, of Islam.

"The symbol of a heart in an open palm, called Heart in Hand, is an image that originated with the Shakers and is often found on crafts, signs, and even cookies. The symbol is a pictorial reminder of the words of Mother Ann Lee, the founder of the Shaker sect: 'Put your hands to work, and your hearts to God.'

"The image of a healing hand, from Native American solar pictographs, is found in many places in the southwestern United States, and its solar spiral most likely represents a shaman's powers. Today, it is often used to symbolize the energy in the healing hands of a Reiki healer.

"In many liturgical churches, as well as my Friends' meeting, parishioners greet each other with a handclasp or handshake during worship. In some churches, this act is called 'passing the peace,' and it may also include a greeting and a hug. My meeting is small enough that, often, we all shake hands with everyone else and then chuckle at ourselves, as we make sure we have greeted every last person. The everyday handshake becomes a spiritual greeting and an expression of love for our fellow travelers in the Spirit." 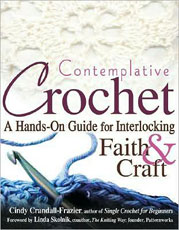