"Say the name Sherlock Holmes, and doubtless, any number of images will come to mind. The pipe. The deerstalker. The cloak. The violin. The hawklike profile. Perhaps William Gillette or Basil Rathbone or Jeremy Brett or any number of the luminaries who have, over the years, taken up Holmes's mantle, including the current portrayals by Benedict Cumberbatch and Robert Downey, Jr. Whatever the pictures your mind brings up, I would venture to guess that the word psychologist isn't one of them. And yet, perhaps it's time that it was.

"Holmes was a detective second to none, it is true. But his insights into the human mind rival his greatest feats of criminal justice. What Sherlock Holmes offers isn't just a way of solving crime. It is an entire way of thinking, a mindset that can be applied to countless enterprises far removed from the foggy streets of the London underworld. It is an approach born out of the scientific method that transcends science and crime both and can serve as a model for thinking, a way of being, even, just as powerful in our time as it was in Conan Doyle's. And that, I would argue, is the secret to Holmes's enduring, overwhelming, and ubiquitous appeal.

"When Conan Doyle created Sherlock Holmes, he didn't think much of his hero. It's doubtful that he set out intentionally to create a model for thought, for decision making, for how to structure, lay out, and solve problems in our minds. And yet that is precisely what he did. He created, in effect, the perfect spokesperson for the revolution in science and thought that had been unfolding in the preceding decades and would continue into the dawn of the new century. In 1887, Holmes became a new kind of detective, an unprecedented thinker who deployed his mind in unprecedented ways. Today, Holmes serves an ideal model for how we can think better than we do as a matter of course." 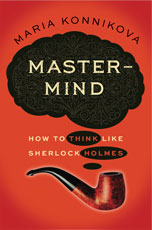