When in Doubt, Sing Prayer in Daily Life

"Virtually every Christian church sings: Byzantine polyphony, Gregorian chant, hymns and chorales of the Reformation, spirituals, shape-note singing, Gospel — music is the compelling Christian art, matched only by the visual glory of icons and architecture. It is an authorial art — witness Isaac Watts, Charles Wesley, Johann Sebastian Bach, Olivier Messiaen, Andrae Crouch — but is also, like all of liturgy (the word means literally 'the work of the people'), a popular, communal venture. Chant, David Steindl-Rast reminds us, 'is a folk art: Its imperfection is part of its perfection. It accommodates all kinds of voices and vocal skill; in the monastery, chant is sung by whoever happens to be there and enters into its shared spirit. Imperfections are therefore inevitable, as they are in life. And this is the point: A remarkable transcendent beauty is generated when ordinary people, with their shortcomings, give themselves to the chant.'

" 'I have been singing since grade school,' said Sylvia, a psychologist and member of both church and community choirs. 'When I think back over all those years, a story comes to mind about the monks who used to sing loudly in prayer every day. They were joined by a young monk who had a gorgeous voice, and so gradually they all stopped praying to listen. And God was very sad. I don't remember the source of the story, but it says what praying in song means to me: doesn't matter what we sound like, God wants us all.'

"We learn our religion through music earlier than we learn it through reading texts. 'As any person who had an early religious training will tell you,' my friend Peter said, 'the music came into their ears and their bodies before the meaning did.' In his Jewish upbringing, Peter recalled, 'I learned the Kaddish, both the mourner's Kaddish and the other forms, long before I knew their purpose specifically and what the words meant. Anyone who hears the notes of the traditional form of that prayer has an immediate emotional response to it: four notes of the Kaddish and anyone with any familiarity will be put in that state of awareness, apprehension, fear of God. Although the prayer has no mention of death, in my mind it is associated with sadness, resignation, and acceptance. Only later in life did the more literal parts praising God and His magnificence and the wonder of creation come to the fore, with the appreciation of the life that was created.'

"I may well owe part of my conversion to Catholicism to Mozart. The Kent State killings occurred on May 4, 1970, my first year at Oberlin College. It was the day of my elder nephew's birth and three days before my eighteenth birthday. The Vietnam War had already come home; this time it was in the neighborhood: Kent, Ohio is less than 50 miles from Oberlin. Our college closed down the following week and went to Washington. A U.S. citizen, I had just moved from Europe the year before and was still a bit of a stranger in my own country. I was passionately opposed to U.S. military involvement in Southeast Asia, but was uncomfortable with direct political action, both because I did not know the political system well and because I did not feel very secure in a politica1 role. I had been demonstrating regularly against the war since my arrival at Oberlin the previous fall — in France, we did learn to demonstrate, and the May 1968 student and worker uprisings had taken place when I was in the eleventh grade — but I had no experience lobbying legislators, which many Oberlinians were planning to do during their Washington visit.

"Then the Oberlin choir, under the direction of Robert Fountain, dean of the Oberlin Conservatory, decided to put together a performance of the Mozart Requiem in three days and to take it to Washington along with the rest of the protest. The conductor suspended the usual rules and did not require an audition. Music was something into which I could enter more easily than lobbying, as a still frightened and disoriented teenager seeking a way to make a difference in the social turmoil around me. And so I became a member of the soprano section of the Oberlin College Community Orchestra and Chorus that sang the Requiem at the Washington ('National') Cathedral after the massive antiwar rally on Sunday, May 10, 1970. For several days, and most of all during the performance, we lived inside the music and it inside us. Mozart's setting of the Catholic Mass for the dead settled in our bodies. I still know the music and the words by heart. At the end of the last bar of music, the cathedral bells began to toll. Spontaneously, we all bowed our heads, silent.

"I had been singing for years, mostly informally: hiking songs in French girl scouts and songs of the civil rights movement in U.S. summer camp, international folk songs with my guitar as a soloist, a school choir or two. In that week in May I moved one step deeper into awareness of singing as an all-absorbing, unifying activity — in some ways the religious activity par excellence because of its ability to bind together all parts of one's being as well as disparate members of a human community. Singing the Requiem, we transcended ourselves, and at the same time were more than ever at our own center, bound by breath, passion, and discipline, mind and heart and soul." 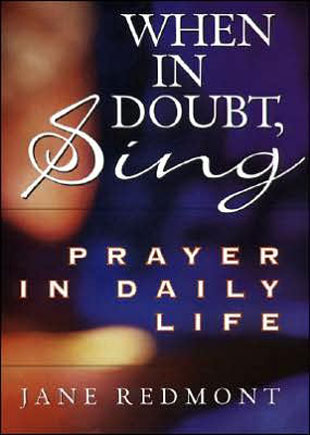