"Bit by bit, we can experiment with feeling what it is like to 'put ourselves into the other fellow's shoes,' being careful not to show off to them what we are doing, lest they find our attention invasive. How amazing and exciting it is to 'be' another person, even remotely — to imagine yourself as the other person so that you feel their perceptions as your own. This kind of imaginative projection helps us see other people's points of view, whether we agree with them or not. And we can expand the experiment so that we imagine being several people at once, perhaps quietly watching from a distance as two people are interacting, and imagining how first one and then the other is feeling as they become attuned to each other.

"This is how the great bodhisattvas of Buddhist legend experienced the world, their consciousness so open to connection with others that they could feel themselves alive in every being. For us, that infinite awareness manifests as whatever it takes to embrace others with love and compassion, and turn them toward awareness of their own freedom and happiness and away from what they habitually experience as limitation and suffering.

"The bodhisattva Avalokiteshvara, who is believed to be incarnated in the present Dalai Lama, represents the infinite altruism of enlightened beings. It is said that Avalokiteshvara made a solemn vow that anyone who heard his name, just by hearing it, would begin to feel that they, too, could find freedom and happiness. Upon becoming a monk, Shantideva chose his own Dharma name, Sanskrit for 'God of Peace,' so that anyone hearing it would feel peaceful. The name Christ comes from the Greek christos, meaning 'anointed,' anointed by the grace of a compassionate God.

"To whatever degree we can expand our sense of identity to include others and preoccupy ourselves with their condition, to that degree we will be happier ourselves. Therefore, we should practice the exchange of self and others, in which we exchange self-preoccupation for other-preoccupation.

"To truly switch self-preoccupation for other-preoccupation, we work up to giving even our body and our life for the sake of others, if necessary. Practically speaking, what this means is that bit by bit, we work on diminishing an exaggerated attachment to the body. If I did not perceive my body as so delicate, so vulnerable, I would not be so afraid of small discomforts and pains. So I need to become less attached to my body. And I must no longer take the lives of other beings to feed it or commit any sort of violence to defend it.

"Our bodies can get us into a lot of trouble. Therefore, our attachment to the body itself can be our enemy. This is super-secret to most of us, however, so we must be careful not to take the statement 'My attachment to my body is my enemy' literally and harm ourselves as a result. We are not talking about destroying the body but about using it properly, as a gift. This can be an important part of exchanging self for other, so our goal in developing greater altruism is served by becoming less and less attached to the body. And we certainly will not be attached to the body if we develop the secret vision that sees such attachment as an enemy. Let me clarify: just as preoccupation with the self is destructive to the self and preoccupation with others benefits the self, so body-obsession, narcissism, and vanity are actually harmful to the body. The hypochondriac worries about getting sick all the time and as a result becomes sick more often than someone who is less obsessed with the body's every twinge. The young girl who compares herself ceaselessly to fashion models becomes afraid to eat and develops anorexia or bulimia, seriously endangering her life. The narcissistic person spends hours and thousands of dollars fussing over his appearance to the detriment of healthy self-regard.

"Dancing, exercise, movement practices, and playing sports are less self-obsessed ways of honoring the body, and people with a positive attitude toward the body and a respectful understanding of how to maintain its health are more likely to thrive. This is yet another of life's paradoxes: the less preoccupied with our bodies we are, the better we fare.

In the practice of exchanging self and other, paradoxes abound. For example, when we are about to give away something we really like — give a scarf to a friend who admired it, for example — we are sometimes stopped by the thought, If I give this away, I won't be able to enjoy it later. But this sort of thinking leads to miserliness. Holding on to things because they might be useful later ends up imprisoning us under piles of useless stuff. Have you ever seen one of those TV reality shows about hoarding? Far from enjoying their accumulated things, the hoarders are depressed, isolated from family and friends, and literally buried alive. A pile of gold bullion hidden away in a bank vault has no practical value. Even a huge bank account is just a bunch of numbers on a piece of paper unless you put it toward something good: invest it, give it to worthy causes, or use it to support opportunities in your life. People who practice exchanging self and other tend to be conscious consumers, not conspicuous consumers. When they are about to spend money on nonessentials, they are often stopped by the thought, Will I really enjoy this when I could be using the money to help someone else instead? This attitude is the opposite of the miser's. It is the thriftiness of the truly generous.

"When we are lost in our self-preoccupation, we focus on what gives us an advantage over others, not realizing that self-preoccupation creates a momentum that can lead to unpleasant consequences in the future. Even a little self-sacrifice enables us to do much good for others. We need to develop the evolutionary perspective that the biological theory of karma encourages a long view that extends beyond this moment or even this lifetime. While we should take care not to deprive ourselves to the point of risking our own or our dependents' survival, we can also recognize that a little self-sacrifice in the service of others moves us toward the supreme benefit of becoming enlightened, of awakening to true happiness and universal love.

"When you live an evolutionary life, you understand causality in a way that is very different from how it is seen by someone who has only this lifetime in mind. You no longer grab what you can get right now, heedless of the consequences. If you manipulate others, using them for your own purposes, the karmic worldview implies that in your evolutionary future you will end up as a slave to others. But when you serve others, using yourself for their benefit, you become the master of the universe. I think of this way of being as 'the Shantideva Challenge.' " 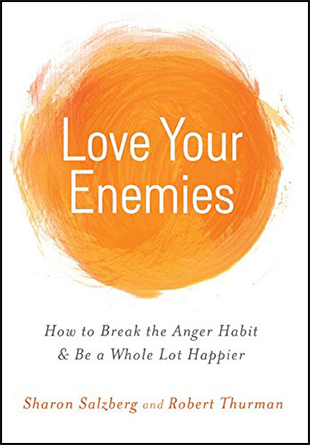