"In an upbeat review, Blake Gopnik of the New York Times wrote, 'Sound art has been on the rise for a decade or two, but it may at last have hit the mainstream.' He pointed out that whereas the auction houses Sotheby's and Christie's had not yet sold any sonic art, 'they've begun to get good prices for major videos. Sound art's vaguely unworldly air may actually increase its appeal.'

"Predictably, the establishment art world has given artsci the cold shoulder, just as it did Renoir, Manet, and the Cubists. Even though science, technology, information technology, and software are bedrocks of our twenty-first-century culture, with a few honorable exceptions curators and gallery owners tend to treat artworks based on them with suspicion. Most curators are schooled in traditional art history and are uneasy in the presence of science and technology which they don't fully understand.

"Moreover, artsci violates the rules of the art world, in which artworks are commodities. Prime among these is that a work must be unique. Most works of artsci are reproducible. They may need to be repaired or improved as technology advances and end up radically different from the original in look and function. Curators are particularly uncomfortable with computer art generated by algorithms, where the image constantly changes and — worse, from the curator's point of view — the human hand behind it is invisible. To their eyes, such works are not art at all but gimmicks.

"There are some notable exceptions. Josiah McElheny and David Weinberg's dazzling glass and aluminum extravaganza Island Universe was exhibited in major galleries across Europe and the US, and Keith Tyson's complex and thought-inspiring works in different media are also widely exhibited and sold through galleries.

"Just as Cezanne, Manet, and Renoir bypassed the establishment salons and exhibited at the Salon des Refuses and the Salon des Independants, and just as the Cubists made use of the services of Daniel-Henry Kahnweiler, so the new avant-garde has established an art world of its own with large venues equipped with all the necessary technology to house the new art: Ars Electronica, the Wellcome Collection, Le Laboratoire, Science Gallery, Documenta, and ZKM. Here they conduct competitions, meet buyers, and gather together to celebrate their work." 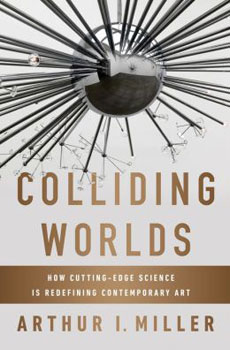