Meister Eckhart A Mystic-Warrior for Our Times

By Matthew Fox
Eckhart takes us to the edge.

"Just as Otto Rank calls us to go 'beyond psychology,' it is fair to say, Eckhart calls us to go 'beyond religion.' He calls us beyond religion as structure, dogma, institution, sectarian tribe, and ethnic identity to something more internal, more deep, more real. He speaks to the 'inner person' rather than the 'outer person' (a phrase he attributes to St. Paul); he focuses on the essence of religion rather than its surface layers. He calls us to spirituality, mystical experience, and prophetic action. He calls us away from external dogma so we might enter the 'cave of the heart' and experience the 'spark of the soul,' which is an experience of the Holy Spirit. He calls for prophetic interference to help end war, tribalism, and the rapaciousness of corporate empire building. He calls for an end to using religion to legitimize the status quo. Instead, he calls us to put our sacred activism, our love energy, to work on behalf of social, economic, ecological, and gender justice. And to honor and foster the mystical dimension of religion, the experiential and intuitive dimension.

"Meister Eckhart calls us to go beyond purgation, illumination, and union as the structure of our spiritual journey. Instead, he names our deepest spiritual experiences along the four paths of the via positiva, via negativa, via creativa, and via transformativa. He calls us to follow the mystics to the frontier of consciousness, to enter humanity's next evolutionary stage. He calls us to consider heart and intuition as, in Einstein's words, 'a sacred gift,' to which our robust rational and intellectual life is a 'servant.' In this way, in our religious life, we heed the warning of Father Bede Griffiths, who said that in all religious systems 'the danger . . . is that the logical structure and rational doctrine will obscure the mystical vision, so inherent is the tendency of the rational mind to seek to dominate the truth which it should serve.' Instead, Eckhart calls us to be the mystic-prophets and mystic-warriors who are needed at this critical moment in human and planetary evolution.

"Are we ready to hear Eckhart's words? Are we ready to wake up to the God within and the God who protests? If so, where might Eckhart be inviting us to travel at this critical moment when so much is at stake? What waits for us beyond this present moment?

"This is another way of saying that Eckhart insists that we do more than rub the surface dimensions of culture and self; we must go deeply into them, to the edge of our understandings and experience — as in Carol Christ's phrase, 'diving deep and surfacing.' It is not enough to wade in, to just get our feet wet. We need to go down deep into the darkness, into the mystery, into the shadow, into the forgotten parts of ourselves as individuals and communities and as a species. Nor is it enough only to go down, whether into the earth, the collective unconscious, or our lower chakras — we must also surface. We must come back, changed and ready to make change. The days of the professional praying class — when individuals entered monasteries to explore the soul in deep contemplation within cloistered communities — are over. That is not the future.

"The future requires all of us to dive deep and return, surfacing with the wisdom, the mysteries, and the truths we learned from diving. In this way, we help birth a new culture — in business and economics, in politics and religion, in art and engineering, in community and agriculture, in the media and law — one that, to use Dorothy Day's phrase, 'makes it easier to be good.' One that makes it easier to be sustainable and to survive as a species.

"Surely there is enough folly and pain in evidence all around us to awaken our moral outrage and shout: 'Enough is enough. Crazy is crazy. We cannot continue fouling and destroying our very special home, our Earth, the only nest we can survive in. Let us get on with reinventing ourselves before it is too late.' " 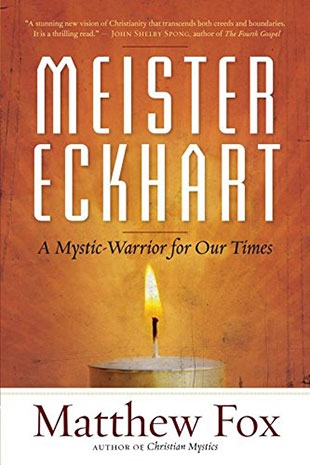