By Kerry Walters
Kerry Walters on how intricately courage and Christian faith are connected.

"What if being a Christian always and everywhere requires valor, and that things have gone terribly wrong somewhere along the line if we've lost sight of that truth? What, in other words, if a Christianity that no longer requires courage has ceased to be the genuine article?

"The nineteenth-century Danish writer Soren Kierkegaard thought so. Although an intensely religious man, he leveled a rebuke at the 'respectable' Christianity of his time that still stings today. Modern Christianity in the West, said Kierkegaard, costs nothing. The easiest thing in the world is to be a Christian. All one has to do is claim the label for oneself and presto! — one's automatically in the club. It's not necessary to attend church, pray, read the Bible, or even take Jesus's life and teachings to heart. As Kierkegaard noted, 'Many people think that the Christian commandments (for example, to love one's neighbor as oneself) are purposely a little too rigorous — something like the household alarm clock that runs a half-hour fast so one does not get up too late in the morning.' If Christianity is so hassle-free and user-friendly that Jesus's words can be interpreted to suit our convenience, what possible need could there be for courage?

"But Kierkegaard insisted that the feel-good and all-too-common variety of Christianity in his day (and ours) isn't the real deal. 'If your ultimate and highest purpose is to have life made easy and sociable, then never have anything to do with Christianity,' he warned, because genuine Christianity is a hard business that calls for a great deal of courage. Without it, how many of us would be able to love those who despise us, affirm joy in times of sorrow, practice patience under trial, remain firm in the chaos of despair, or steady in the face of skepticism and hostility? Without courage, how many of us could, like Bunyan's Pilgrim, stay the course? We often say that love, joy, patience, and steadfastness are the gifts of faith. But without courage, no person would dare commit to the Faith in the first place. Without courage, no one could live the Faith. And without courage, no one would be willing to suffer persecution, much less to die, for the Faith. Fidelity to the real Christ, not the comfortable idol we too frequently substitute for him and whom Kierkegaard scorned, demands valor. It's no surprise that scripture encourages us again and again, 'Be not afraid!' " 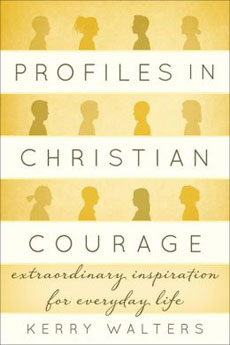