"We decided to have a rededication ceremony along with two other couples with whom we were close. The six of us met several times. We relished the idea of reviewing and reviving our marriages. We found certain issues that were common to all, and certain issues that were unique to each couple. Each couple found that 'In Whose Name' had changed from their previous marriage.

"We decided to hold our rededication as a group, a ceremony that acknowledged the commonalities of recommitment and that also acknowledged the unique character of each individual and each couple.

"We shared the desire to be freed from the vows of the previous wedding ceremony, which had occurred decades previously. Times had changed and we now experienced life differently. The circumstances of the relationship, the life stage, the sense of what was important and what was not, had also changed. These preliminary discussions proved very worthwhile.

"We all agreed that experiencing a short span of time of being single again was symbolically important. We decided to begin in the center of the ceremonial space as couples, standing together, holding hands, facing out. Then we took off our wedding rings and plopped them into little containers of scented salt water for a good cleanse. We walked out of the center of the circle in six directions as individuals. We intended to enjoy the feeling of being single before rediscovering our mates and partners. The celebrant called each one by name, asking if he or she was ready to commit to something new and dynamic. One at a time, each person in a couple affirmed 'Yes!' and returned to the center of the circle, where they redefined and recommitted to a marriage. Then the next couple was reunited, and the third couple reunited. It had the sense of returning to a known partner and the sense of creating something completely new. We danced a simple form choreographed by one of the six that showed each individuality, the partnership, and – indicating the ONE – all six dancing in clearly defined geometrical forms. We asked the witnesses to join us, beholding us with fresh eyes." 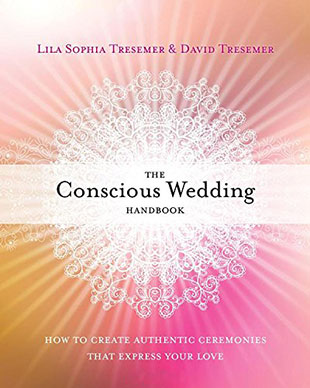