Liturgy of the Ordinary Sacred Practices in Everyday Life

By Trish Harrison Warren
An example of how to change an imprinted behavior, such as checking your smartphone first thing in the morning.

"At that time, my typical morning routine was that shortly after waking, I'd grab my smartphone. Like digital caffeine, it would prod my foggy brain into coherence and activity. Before getting out of bed, I'd check my email, scroll through the news, glance at Facebook or Twitter.

"If humans rescue a baby animal in the wild, the animal is said to be 'imprinted.' It accepts the human as its mother. From that point on, it will believe that all good things come from people. It is no longer wild and it cannot live on its own. The nature center in my town houses imprinted animals – baby mountain lions, raccoons, and porcupines who rely on humans for food, water, shelter, and protection.

"My morning smartphone ritual was brief – no more than five or ten minutes. But I was imprinted. My day was imprinted by technology. And like a mountain lion cub attached to her humans, I'd look for all good things to come from glowing screens.

"Without realizing it, I had slowly built a habit: a steady resistance to and dread of boredom.

"Technology began to fill every empty moment in the day. Just before breakfast, I'd quickly scroll through email, Facebook Twitter, a blog. And then again an hour later. I'd ignore my kids' persistent calls for milk and snacks with a distracted 'hold on' as I vaguely skimmed an article. I'd sneak in five minutes online as they ate lunch. I'd return from an errand and sit in the driveway with the car running, scrolling through news on my phone, and then I'd check my screen again before bedtime. Throughout the day I fed on a near-constant stream of news, entertainment, stimulation, likes, and retweets. Without realizing it, I had slowly built a habit: a steady resistance to and dread of boredom.

"After my makeshift sociological study on bed making, I decided that for Lent that year I'd exchange routines: I'd stop waking up with my phone, and instead I'd make the bed, first thing. I also decided to spend the first few minutes after I made the bed sitting (on my freshly made bed) in silence. So I banished my smartphone from the bedroom.

"My new Lenten routine didn't make me wildly successful or cheerfully buoyant as some had promised, but I began to notice, very subtly, that my day was imprinted differently. The first activity of my day, the first move I made, was not that of a consumer, but that of a colaborer with God. Instead of going to a device for a morning fix of instant infotainment, I touched the tangible softness of our well-worn covers, tugged against wrinkled cotton, felt the hard wood beneath my bare feet. In the creation story, God entered chaos and made order and beauty. In making my bed I reflected that creative act in the tiniest, most ordinary way. In my small chaos, Imade small order." 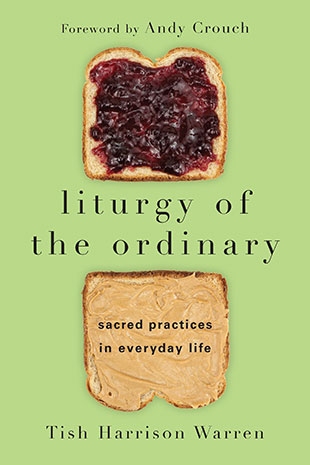