By Arlie Russell Hochschild
Letters to those on either side of the political divide suggesting what they have in common.

"If I were to write a letter to a friend on the liberal left, I would say:

"Why not get to know some people outside your political bubble? Set aside Ayn Rand; she's their guru, but you won't find people personally as selfish as her words would lead you to expect. You'll probably meet some very fine people who will teach you volumes about strong community, grit, and resilience.

"You may assume that powerful right-wing organizers – pursuing their financial interests – 'hook' right-wing grassroots adherents by appealing to the bad angels of their nature – their greed, selfishness, racial intolerance, homophobia, and desire to get out of paying taxes that go to the unfortunate. As I saw at the Trump rally in New Orleans, some of that appeal goes on. But that appeal obscures another — to the right wing's good angels – their patience in waiting in line in scary economic times, their capacity for loyalty, sacrifice, and endurance – qualities of the deep story self.

"Consider the possibility that in their situation, you might end up closer to their perspective.

"If I were to write a letter to my Louisiana friends on the right, I might say:

"Many progressive liberals aren't satisfied with the nation's political choices any more than you are. And many see themselves in some parts of your deep story. As one sixty-year-old white, female, San Francisco-based elementary school teacher put it, 'I'm a liberal but, hey, I can sympathize with that part about waiting in line.' I know the goals you have in mind – vital community life, full employment, the dignity of labor, freedom – but will the policies you embrace achieve those goals? You want good jobs and income, of course. You may not want to hear this, but in income and jobs, historically the Democrats have done better than the Republicans. . . . Still, differences between the parties are otherwise far from clear. Bill Clinton, a Democrat, ushered in an era of deregulation, generally favored by the right, while Richard Nixon, a Republican, initiated environmental regulations now generally favored by the left. . . .

"As you get to know them, you'll find progressives have their own deep story, one parallel to yours, one they feel you may misunderstand. In it, people stand around a large public square inside of which are creative science museums for kids, public art and theater programs, libraries, schools – a state-of-the-art public infrastructure available for use by all. They are fiercely proud of it. Some of them built it. Outsiders can join those standing around the square, since a lot of people who are insiders now were outsiders in the past; incorporation and acceptance of difference feel like American values represented in the Statue of Liberty. But in the liberal deep story, an alarming event occurs; marauders invade the public square, recklessly dismantle it, and selfishly steal away bricks and concrete chunks from the public buildings at its center. Seeing insult added to injury, those guarding the public square watch helplessly as those who've dismantled it construct private McMansions with the same bricks and pieces of concrete, privatizing the public realm. That's the gist of the liberal deep story, and the right can't understand the deep pride liberals take in their creatively designed, hard-won public sphere as a powerful integrative force in American life. Ironically, you may have more in common with the left that you imagine, for many on the left feel like strangers in their own land too." 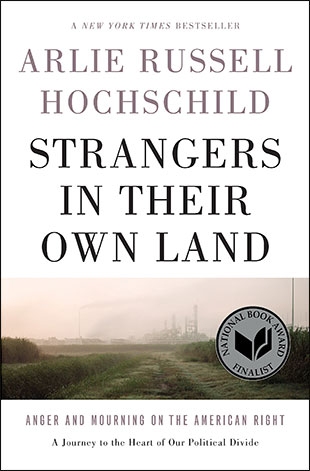