By Franco Moretti
Reasons why Red River is the greatest of all epic Westerns.

"Wagon train. 'Cinema is the specifically epic art,' wrote Andre Bazin in a famous essay on American film, and 'the migration to the West is our Odyssey.' Epic, yes; Odyssey, no. That there is no return is the founding act of the genre. Home is a vague hope, distant in space and in time; for now, all there is is a wagon; two or three generations, together, surrounded by hundreds of other families; all different, and all leading exactly the same life. Life in the open, on unsteadily undulating stoops, under everybody's eyes; because what matters, in these films, is not the private sphere of the individual family — we never see the inside of a wagon, and the intimacy of a sentimental conversation, or of a good wash, are often met with rough collective humor — but the amalgamation of everybody into a community. Into a nation. 'Gathered from the North, the South and the East, they assemble on the bank of the Mississippi for the conquest of the West,' announces the opening of The Big Trail (1930). Conquest: the tempo remains slow, but it has become unyielding. The eyes of the American people, wrote Tocqueville at the onset of the great migration, 'are fixed upon [their] own march across these wilds, draining swamps, turning the course of rivers, peopling solitudes, and subduing nature'; they 'enjoy dreaming about what will be.' Dreaming . . . But this is more like an obsession. The march of the wagon train can never stop: a hasty prayer, and the dead are buried and left forever behind; a child is born, and hours later is already on the move. Everyday life is both implacably everyday — always brewing coffee, always mending socks and washing their only passable shirt — and frightfully unpredictable: a danger that comes less from human enemies (although the conflict with 'Indians' is present in most films of migration), than from the hostility of nature: it's always too hot, too cold, too dry, too windy . . . rain, dust, snow, mountains, rapids . . . So much friction, in these films, not a journey in which a wagon doesn't get stuck in the mid; not a scene in which they go downhill, for a change. Rarely do fictional characters work as hard as in early Westerns: keeping the animals together, cutting down trees, crossing rivers, digging passages, overcoming crazy obstacles. After all this, they deserve the West. They have been a stubborn, single-minded human herd; which is the reason Red River, with its supremely unpromising storyline (moving ten thousand cows from Texas to Missouri, imagine that), is the greatest of all epic Westerns. Those cattle are the settlers: and in the film's terrifying stampede, caused by a man who wants to eat sugar in the middle of the night, the destructive potential of the great migration erupts for a moment, earthquake-like, into the open." 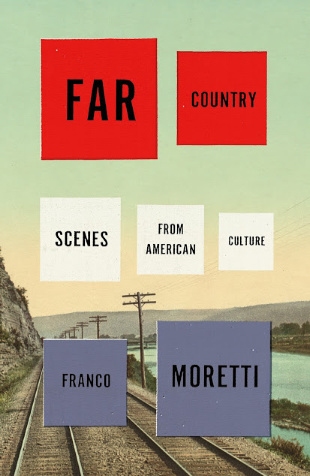